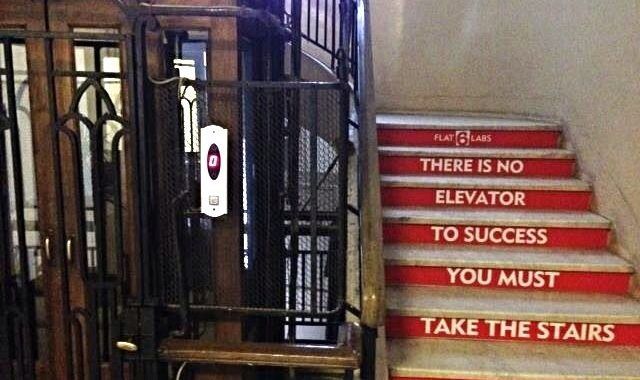 When most people eyed the kilometer-long queues outside diesel stations early this summer, they saw dysfunction. But for Mariam Afifi and her business partners, they saw opportunity.

At first glance the unrest wracking Egypt, not to mention its underlying causes, could seemingly render new business ideas stillborn. But Afifi, 23, and other young entrepreneurs are challenging the conventional wisdom, seizing those opportunities in the dysfunction.

She and her business partners decided to move forward with a project to convert waste vegetable oil into biodiesel.

“We thought if we actually had the biodiesel then, it would have made a difference but we weren’t ready at the time,” she says.

Afifi’s company, Tagoddod, is one of six companies currently being housed at Flat6Labs, a tech startup accelerator located in an antique building just across from the Giza Zoo.

Gathered around laptops and walking through red doorframes, the entrepreneurs there have been working on their projects for months, preparing for a collective investment pitch.

Her team and other startups in the incubator debuted their products and ideas at a posh Zamalek hotel in late September. They pitched to a crowd full of suits, with slick graphic presentations and Fortune-500-style over-the-ear microphones.

Flat6Labs was co-founded in the first weeks of 2011 by Ahmed El Alfi, a venture capitalist and chairman of Sawari Ventures. “Two weeks later, we put everything on hold,” he says, recalling the start of the January 25 uprising.

“It’s been an interesting two years,” he adds, as he introduced the companies, referring to the unrest that has provided some of the business ideas being nurtured in the incubation process at Flat6Labs.

The “online” aspects of that unrest have helped pushed some business ideas forward.

“After the revolution, online literacy increased dramatically,” says Kareem Youssef, CEO of Babyboon.com. “The online industry is booming. If you want to start this project in this industry, everyone will start encouraging you, especially investors.”

Youssef points to brick-and-mortar retail stores as having lots of issues in the wake of the uprising, with the security situation making it riskier to go to stores to shop, especially for women, a problem which his business, a baby goods ecommerce platform, seeks to address.

The birthrate that Youssef’s business depends on is also attractive for investors. A recent world competitiveness report issued by the World Economic Forum pointed to Egypt’s large market as one of the untapped sources of growth for the future.

“The Egyptian market is not like any other,” says Afifi. “No matter how the product you want to sell seems like a crazy idea, you will always have a market for it. We have different people on so many levels.”

The same report said that Egypt will have to transition from growth driven by improvements in efficiency to an innovation-powered economy if it wants to become more competitive in the global market.

While small and medium-sized enterprises (SMEs) make up about 80 percent of Egyptian businesses, they contribute less than a quarter of the country’s GDP, according to a report by the General Authority for Investment.

Stagnant GDP growth rates of 2 percent since the 25 January uprising can hardly keep apace with the tens of thousands of new entrants to the job market — and this while Egypt’s ailing economy continues to suffer from bouts of political turmoil. In turn, unemployment has increased to 13.3 percent, according to CAPMAS.

Herein lies the vital need to support SMEs, a sector that can create the jobs needed annually to keep Egypt’s economy healthy, taking the strain off a state that was unable to close the gap even under Hosni Mubarak’s regime, when growth rates averaged a more robust 7 percent.

The untapped potential of SMEs has only recently been seized on by the government and global financial institutions. In the past three years, it has mostly been young entrepreneurs driving the growth and creating the proper ecosystem.

Mourad Sioufi, one of the co-founders of Koretna, a website that looks to help organize the amateur soccer community in Egypt, thinks entrepreneurs like him will help drive the further development of the market.

“I think they’re going to have a huge impact on the long run,” Sioufi, 25, says. “This is the tech boom for us. It’s going to help our economy grow and develop and it’s going to bring a lot of foreign investors into Egypt. Everyone is talking about us being the new Silicon Valley.”

Sioufi’s pitch was successful enough to have some meetings set up with investors. While these investors may be negotiating for equity, other SMEs look to different financing options.

Still, access to finance remains a key hurdle for opening a small business.

The IFC helped open Egypt’s first private credit bureau in 2009, and the National Bank of Egypt and the Social Fund for Development have increased financing options for SMEs. As SME became a buzzword toward the end of the last decade, their access to financing became the one of the main targets in economic reports by both private sector organizations and the government.

Other important infrastructure is beginning to be built online. This year the Arab African Bank opened an e-commerce gateway, and the National Bank of Egypt followed suit last month. With recent significant investments in Fawry and Paypal, electronic payment has become easier in what continues to be a mainly cash-based economy.

Small steps taken toward developing the proper ecosystem have also run parallel to a cultural movement among entrepreneurs.

Koretna and Tagoddod both have a strong social aspect to them past simplify identifying business opportunities. Sioufi speaks mostly about “communities,” while Afifi makes frequent references to the environment.

Both companies are working on marketing strategies with events that resemble NGO work more than promotional campaigns.

These entrepreneurs see themselves as optimistic among a sea of disillusion with the country’s future.

Mazen Helmy, who runs The District, a co-working space for entrepreneurs in Maadi, says he sometimes feels like he is on “an island” amid a sea of doubters.

Part of that optimism has been cultivated. The District has a library full of Donald Trump books, marketing strategies and accounting books, as well as two four-month-old pit bull terriers, Cesar and Julia, playing on a balcony used for barbeques.

“People here see opportunities. They are still working, and they see a way out of it,” Helmy says as the dogs wrestle behind him. “If these 25 entrepreneurs here are working after two years, with all the challenges happening, and the government going out and all these things, they definitely see opportunities.”

The optimism is needed especially as the economy continues to suffer. A friend of Youssef’s in the marble and granite business describes the issues facing conducting business as “awful.” Containers are lost, and the fluctuating security and monetary situations in Egypt are forcing constant renegotiations of contracts.

“Its not about how you hit, its about how hard you can get hit,” says Youssef. “Just be focused, be consistent, be determined and eventually everything will start picking up.”

AD
You Might Have Missed
Where do old lesbians go to die?
Carbon Colonies & A Green New Deal
What we talk about when we talk about trees
Mugamma revisited: Reimagining the building and the square
AD
Jahd Khalil
22 articles on Mada