CC on the walls 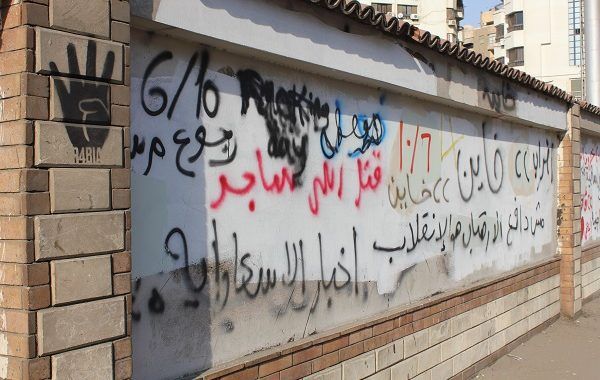 Cairo’s streets have been overtaken by a new kind of political rhetoric. A barrage of hastily scrawled “anti-coup” graffiti covers walls, billboards, sidewalks, garbage cans, trees — almost any surface that can be written on or spray-painted.

This new wave of political graffiti is the handiwork of supporters of deposed President Mohamed Morsi. And it has come to dominate the political graffiti and street art scene that flourished after the January 25 uprising, but went dormant after Morsi’s ouster on July 3.

Protests demanding Morsi’s reinstatement clearly denounce the interim government and the military’s intervention in politics, which demonstrators call a coup. But above all, they staunchly oppose Defense Minister Colonel General Abdel Fattah al-Sisi, who is the target of most of their graffiti messages.

Anti-coup and pro-Morsi graffiti is perhaps most prevalent in Cairo’s eastern district of Nasr City, where troops forcefully dispersed the largest pro-Morsi sit-in outside the Rabea al-Adaweya Mosque on August 14, resulting in more than 600 deaths, thousands of injuries and hundreds of arrests.

Virtually every street in Nasr City is covered with graffiti denouncing military rule, the “bloody military coup” and Sisi, whose name has been abbreviated to the Roman letters CC.

The most common graffiti messages claim that “CC is a traitor,” “CC is a killer” and “CC is here” — the latter message commonly painted on garbage cans. 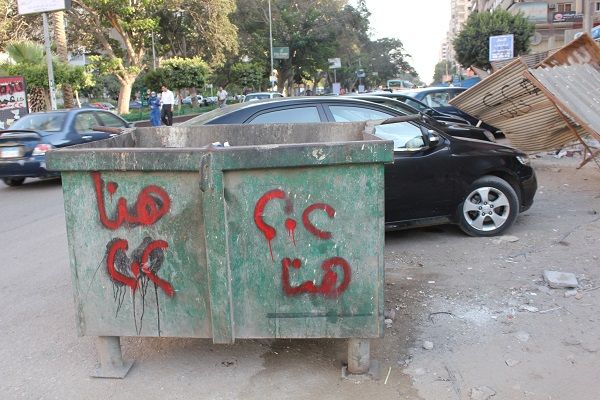 The words “anti-coup” written in English are also seen frequently, as are “coup = terrorism” and the popular chant by Muslim Brotherhood supporters: “Depart oh Sisi, Morsi is my president.”

The only form of expression left

On October 6, the Muslim Brotherhood and their allies in the umbrella group that calls itself the Anti-Coup Alliance organized protests across the country. When some tried to enter Tahrir Square, they clashed with security forces and scattered to surrounding neighborhoods, where they also faced off with residents of the areas.

Marching through Nasr City with a small group of around 100 Morsi supporters, one protester swiftly spray-painted his graffiti on a billboard: “Down with military rule.”

The young man refused to be interviewed and angrily demanded that he not be photographed while spray-painting.

Standing by his side, another young Morsi supporter who identified himself only as Mahmoud said, “They’ve killed and arrested us. They’ve censored and banned all our media outlets. And so we are left only with our peaceful protests and peaceful expression.”

According to Mahmoud, “These writings are the means by which we deliver our messages of opposition against the bloody coup.”

Both of them quickly walked away to catch up with the advancing march.

But where is the art?

Meanwhile, the street artists of the 2011 uprising appear to have either abandoned their art, chosen to remain silent or been forced underground in the months since mass protests led to the Armed Force’s removal of the former president.

“Nowadays, the politically charged atmosphere is not conducive to making attractive or artistic graffiti and murals,” says Alexandria-based artist Aya Tarek. “Graffiti is presently viewed as being garbage, something that should be cleaned up or covered up.”

Indeed, authorities have whitewashed older murals and street art commemorating the 2011 uprising and its subsequent struggles — images that had become iconic of the fight and those who lost their lives for it.

For Tarek, the new types of graffiti that are taking the place of the old murals are “more like vandalization rather than art.”

The activists involved in these new graffiti campaigns appear to be more interested in publicly posting their messages than in the aesthetic value of their graffiti. In Cairo, they have produced no murals and very few stencils, forms which became prevalent over the past three years.

The most common stencils include Morsi’s bearded and bespectacled face along with the four finger salute signifying Rabea (four) al-Adaweya, with the letters “R4BIA” beneath the hand.

According to the revolutionary street artist Omar Mostafa, the graffiti painters of the Brotherhood and Anti-Coup Alliance “use quick freehand writings.”

“They don’t produce murals or intricate street art, as they are afraid of being arrested,” he says. “These people don’t have the opportunity to stand by and prepare a time-consuming mural. If they attempted to do so they would be attacked by the populace and arrested by the police.”

It does appear to have become more dangerous to make street art in recent months. On the 40th anniversary of the October 6 War, authorities arrested the anti-authoritarian and anti-Morsi street artist Ahmed Naguib as he was painting graffiti critical of the police near Tahrir Square on Mohamed Mahmoud Street — a veritable open air street art gallery.

A few weeks earlier, on September 19, security forces arrested two members of the Ultras White Knights after they spray-painted messages critical of the police near the Zamalek Sporting Club in Cairo. Security forces also reportedly arrested a number of Morsi supporters while painting “anti-coup” messages, but the total number of these arrests is not known.

But Mostafa doesn’t think the need for speed is an excuse. “They’re using our earlier paint-and-run tactics. Moreover, their graffiti lacks originality and artistic value,” he claims.

Mostafa argues that the four-fingered “R4BIA” insignia, especially its yellow and black colors, was inspired by previous street art associated with the No to Military Trials campaign.

“Nevertheless, this is their way of expressing themselves following the crackdown at Rabea, just as we expressed ourselves through street art and murals of martyrs on Mohamed Mahmoud Street,” after bloody clashes took place there in 2011 and 2012, he says.

Despite being victims of violent crackdowns, the Anti-Coup Alliance has also produced more divisive and intolerant messages.

While the Muslim Brotherhood and its political wing, the Freedom and Justice Party, officially denounced these sectarian attacks, pro-Morsi graffiti around the Rabea sit-in carries clear sectarian messages. Pro-Morsi Islamists condemned the Coptic Pope Tawadros II and the Grand Sheikh of Al-Azhar for openly siding with General Sisi’s removal of Morsi.

Most of these were painted over when sectarian assaults escalated after the August 14 dispersals.

More recently, the symbol of the cross has been replaced by that of the Jewish Star of David, with newer graffiti reading “CC = Star of David” or “CC is the agent of Star of David.”

Often, graffiti messages from opponents and supporters on both sides are layered as the political fight plays out on the walls of the city. 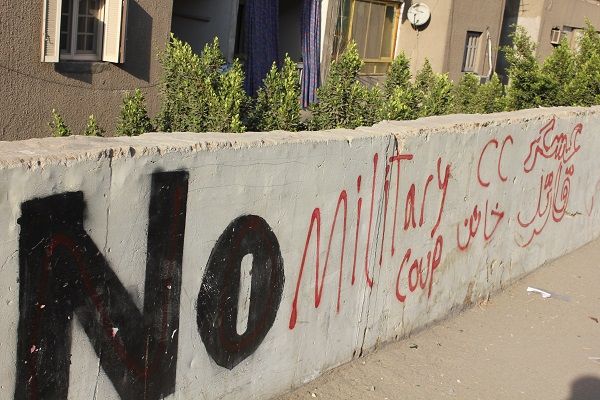 “Wipe it off and I’ll paint it again” reads one message on the walls where pro-Morsi graffiti was whitewashed.

Around the Ettehadiya Presidential Palace, a military stronghold and bastion of pro-Sisi sentiments, pro-army graffiti screams “God damn Rabea” along with an assortment of anti-Morsi messages.

Describing such graffiti as an eyesore, Tarek says, “All these accusations and curses, back and forth, are merely insults written on walls, not street art. I wouldn’t even call it graffiti.”

“I want to re-enter and revive the street art scene, using good materials to make quality art. Yet collective street art events are not taking place because of the current unrest and instability,” she says.

Tarek aspires to create beautiful art on Egypt’s streets to replace the now-prevalent political graffiti which is scribbled on walls, blotched-over and re-painted.

“My work is not political, it is purely artistic,” she says.

Mostafa points out that “the present political situation is unclear and uncertain. The state’s so-called ‘war on terrorism’ and other propaganda is being instilled in the populace — so if we are involved in street art critical of the security forces, then we will be accused of being members of the Muslim Brotherhood, or terrorists.”

He believes there will be a “resurgence of proper street art in the near future when the political situation becomes clearer and more settled.”

Abu Bakr and other street artists are working on a large mural on Qasr al-Nil Street in downtown Cairo. He insists the street art scene has not died.

“People need to know who killed the martyrs, and people need art in their everyday lives — not merely for those who can afford to go to an enclosed art gallery, but for everybody walking or driving past on the streets.”

“We are not hiding,” he says, “Anti-graffiti laws will not keep us from expressing ourselves through street art.”