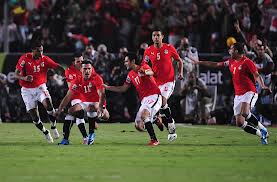 As most Egyptians collectively turned to their screens on Tuesday night to watch the Egypt-Ghana game on which qualification for the World Cup depends, jokes — mostly political in nature — prevailed.

In the first half of the match, Ghana already scored 5 to 1 for Egypt, to which a sports commentator on state television said, “You guys don’t have to make it to the world cup, but 6/1 is way too much.”

The score has already disappointed many, who quickly turned it into political satire. More precisely, the Egypt-Ghana game was used as a metaphor for the on-going struggle between the military and the Muslim Brotherhood, recently ousted from power and now banned.

Earlier, people following the match said that Ghana’s fourth goal would be the reason for their team to carry the four fingers sign raised by Muslim Brotherhood supporters to commemorate the forced dispersal of their sit-in at Rabea (four) al-Adaweya in Cairo.

At five goals, the more hopeful, Mada Masr included, saw some blessing in disguise as the tradition has it that the number five keeps the evil eye away. But Ghana’s six goals shattered all hopes.

Twitter user Khaled Adeeb who was watching the match on Al-Jazeera wrote, “Egypt is not losing, since when do you believe Al-Jazeera?” alluding to the criticism the Qatar-based channel received in Egypt over its support of the Muslim Brotherhood and ousted President Mohamed Morsi.

Developer Zeinab Samir, meanwhile, commented, “Should we mandate [Armed Forces Commander-in-Chief Abdel Fattah] al-Sisi to go down?” in what was a reference to Sisi’s call for a popular mandate to confront violence in Egypt. Human rights advocate Ahmad Ragheb followed that line of jokes saying that it’s time for Sisi to call on the people of Ghana to let this game to them as as a first favor for him.

Meanwhile, Journalist Cliff Cheney wrote, “Someone shoot tear gas on the field. The Egypt players will feel more at home and play better.”

Many Twitter users joked about Brotherhood members cheering for Ghana, a pun on the accusation made by supporters of the military that they Brotherhood do not share a of belonging toward Egypt. Others said that Egypt’s loss so far is a plot by the Brotherhood. Some said that “Egypt is clearly not ready for the World Cup”, a play on the famous counter-revolutionary line of Egypt not being ready for democracy.