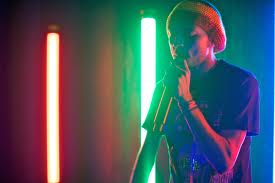 By
Andeel
The miserable book of my life,
I’ve never seen such a book,
There is happiness in only two lines,
The rest is all torture…
Torture…
Torture…

Pop music’s ability to reflect the way people think or feel in a given society is such a clichéd subject. You wouldn’t add anything to humanity if you wrote a deep analysis showing the connection between hip-hop and race in America, Franco-Arab diaspora songs and ghetto life, or Justin Bieber and the pains of hormonal change.

Yet I’d like to do the expected — because that’s the least expected — and talk about Egyptian pop music.

The lyrics above come from a song that was a very successful hit in the 1990s. Kitab Hayaty ya Ain (The Miserable Book of my Life) by Hassan Lasmar (Hassan the Black — yes that is his family name) made him famous, encouraging him and his fellow pop singers to make dozens of songs with a similar formula.

“What have I done for my hands to be in need?

My goodness has left no hand around me in need,
My wealth was wasted on those who don’t deserve it, indeed.

Ramadan al-Prince (no need to translate this one) made an album that sounded like homemade wedding recordings. Benefiting from the bluriness the low quality production created, for full marks, Prince passed away right after the release of the album in a car crash. People loved the story.

Long before this, Egyptian pop music had been famous for being the arena for “real” singers. The complicated traditional scales and the very ornamental, folk inspired style of singing has always been challenging for singers. For people of the upper class listening to popular or sha’aby music was a gesture of a heroic, simple, people-friendly, anti-classist lifestyle.

In the 1950s and 1960s, at the dawn of modern folk, lyrics tended to focus on love-related topics with a popular twist.

I live in Sayida neighbourhood,
My loved one lives in Hussein,
Only to get some love,
I do the trip twice a day!

Pop changed dramatically in the 1970s along with lots of other social change in Egypt at the time. The sudden, popularly dismissed peace treaty with Israel, the acute change from semi-socialist economic policies to a random open market, and the quick growth of corruption all created a new sphere for human interactions. It was a sphere where people were finding themselves crushed between the titans of monopolies and a feverous race of consumerism that many weren’t prepared for.

Situations in which your friends valued money over you (which probably also happened before the 1970s, but it seemed like it wasn’t happening frequently because the government had all the money to save friendships) started happening a lot and people were upset about it. Moreover, systematic political marginalization made a lot of people enjoy the egocentric feeling of being the victim in a musical.

Pop no longer had an epic reputation for being the music of welad al-balad (the homeland’s children). Terms like vulgar, dirty, distasteful and tacky started popping up in relation to pop. Did that have anything to do with social change and class restructuring in Egypt? Maybe. Was it a way for lots of the nouveaux riche to state in no uncertain terms that they’re not from Sayida anymore, that they don’t listen to Black Hassans, that they listen to white music? Perhaps.

But the class clash showed itself more clearly later.

I was having a conversation with a friend about mahraganat music. My friend was complaining about how lots of downtown phony pretentious people (in other conversations we just call them intellectuals, but the first description is more accurate) are all thrilled and happy about mahraganat music, with phony pretentious theories about how original it is, how brilliant and culturally strong it is.

Unfortunately the phony people are right, and my friend, who spent his upbringing between Dubai and Heliopolis (a posh district of Cairo), is wrong.

Mahragan means festival in Arabic. It’s a colorful word that people use as slang when they are talking about something extravagant, loud, full of happiness, and sometimes extremely messy. The first time I heard mahraganat music was a wedding in a popular area. In some places in Egypt part of the wedding ritual is that the families of the newlyweds take a new handmade mattress bought for the love nest out onto the street and start filling it with new cotton, providing music and drinks for the neighbors. The act of filling a mattress with new cotton is called “tangeed” and the song that was playing was called “Mahragan al-tangeed.”

The beats were computer generated yet had a very traditional root, there was a weird squeaky electric instrument playing a sick hypnotic melody every now and then, and the vocal was excessively auto-tuned to give a creepy robotized effect. I have to admit that the music completely blew me away. I couldn’t love it from the first encounter of course, because I couldn’t figure out what the guy was saying (even though I managed to make out random names in the song that sounded like names of friends of the artist, which was also fascinating) but the song grabbed my attention and make me think about it.

It wasn’t long before I was introduced to artists leading the field, like Amr 7a7a, Okka & Ortega, and Sadat, all young kids in their 20s, looking and posing and dressing like any kids you see in very poor areas in Cairo. And like the poor kids of Cairo, they were everywhere.

There’s one thing that I have to say before I carry on with the article, in case you’ve started googling the music already. This music is bad! It’s a bit of a generalization to say this, but you’d only like it if you like the taste of liver sandwiches from the dirtiest of Cairo’s carts. It’s going to be difficult for you to like it if you’re the kind of person who asks the waiter in the sheesha place for the plastic thingy that they put on the tip of the pipe to make it less contagious. This music is polluted, dirty and contagious. And it’s not cool because of that, or because it’s an easy way for you to sound like you’re from the block.

In my opinion it’s cool because it manages to piss people like my sweet friend from Heliopolis off. I don’t care about what the pretentious people say or think, they always like stuff for their own reasons and they always ruin things for you like by liking them. They did that to Ziad Rahbani’s music, they did it to Mahmoud Darwish’s poetry, and they will always keep doing it.

What I care about is how mahraganat music is all about reminding people like my friend that the images they are trying as hard as possible to forget about still exist.

My friend is getting married soon. His love nest is in a new compound built recently next to a giant shopping center in Maadi. He chose the spot carefully because he wanted his new life to be where it is clean, he said. My friend is paying a lot of money to get away from the chaotic and repulsive presence of people who are listening to this kind of music. And the kids are responding by playing it louder and louder.

These kids are different from the middle-aged, broken-hearted men of the 1980s whose way of responding to injustice was either to become part of it, or sob in sad songs about the betrayal of fate. These kids know what it feels to burn a police vehicle and how to transport a wounded protester on a stolen bike. These kids know there are people in the country who are much richer than them, who don’t like them and think they are disgusting. They respond with insanely annoying music. It’s a generation of confrontation. It knows that something is not fair. For now the response is as sweet as music. Later it’s going to be more than that.

My friend from Heliopolis is nice, he was trying to explain, from an artistic approach, why this music is poor in taste.

When my friend gets married I’m sure there will be no tangeed in the street.

AD
You Might Have Missed
Where do old lesbians go to die?
Mugamma revisited: Reimagining the building and the square
What we talk about when we talk about trees
Carbon Colonies & A Green New Deal
AD
Andeel  @_andeel_
280 articles on Mada

Topics
Related
feminism
Pop, patriarchy and fake nostalgia
Maha ElNabawi | In seeking to make hits, female singers started making songs speaking in the language an insecure man
2014 presidential elections
Songs for voting to
Andeel | Exploring the murky world of Egypt's propagandist pop music.
Andeel
Profile of Andeel: Cartoonist, autodidact, funny man
Jahd Khalil | A friend once told me that laughter is a very basic expression of understanding. This makes sense to
100Copies
Music, crisis and creative spaces in Cairo
Maha ElNabawi | We figured, if we’re all going to be cooped up in our houses, we might as well be cooped up in a music