اقرأها بالعربية
The people, the church and the state

By
Naira Antoun and Lina Attalah

BENI SUEF — Childish handwriting. Ripped out sinks in the bathroom. The smell of burning. “There is no God but Allah, and Mohamed is his prophet” scrawled on the walls. Birth certificates on the floor.

Attackers burnt the Franciscan school of Beni Suef on the day that two sit-ins calling for the reinstatement of former President Mohamed Morsi were forcibly dispersed on August 14. There was also an attempt to kidnap the nuns who resided in the convent school, which housed a church.

“What they could not take, they destroyed, even the tiles in the church,” recounts Father Boulos Fahmy, of the Coptic Catholic congregation that handles prayers at the school and manages the nearby St. Therese Hospital.

This spectacle of sectarian violence does not point to a social problem of sectarianism or a state failure at confronting it for either Fahmy or Cleric Samer Farag. The problem for them, rather, is the Muslim Brotherhood.

Both are emphatic that there are no problems between Christians and Muslims. “We don’t have problems with Muslims. In feasts, we exchange cookies with one another. We went to schools together and go to each other’s homes,” Farag says, invoking a familiar refrain in conversations about Muslim-Christian relations in Egypt.

“I don’t think there is sectarianism in general,” Fahmy says. “Muslims were the first to stand and protect churches when attacks started after June 30 [when masses took to the street calling for Morsi’s resignation].”

The student body of the school was itself two-thirds Muslim, they both add. 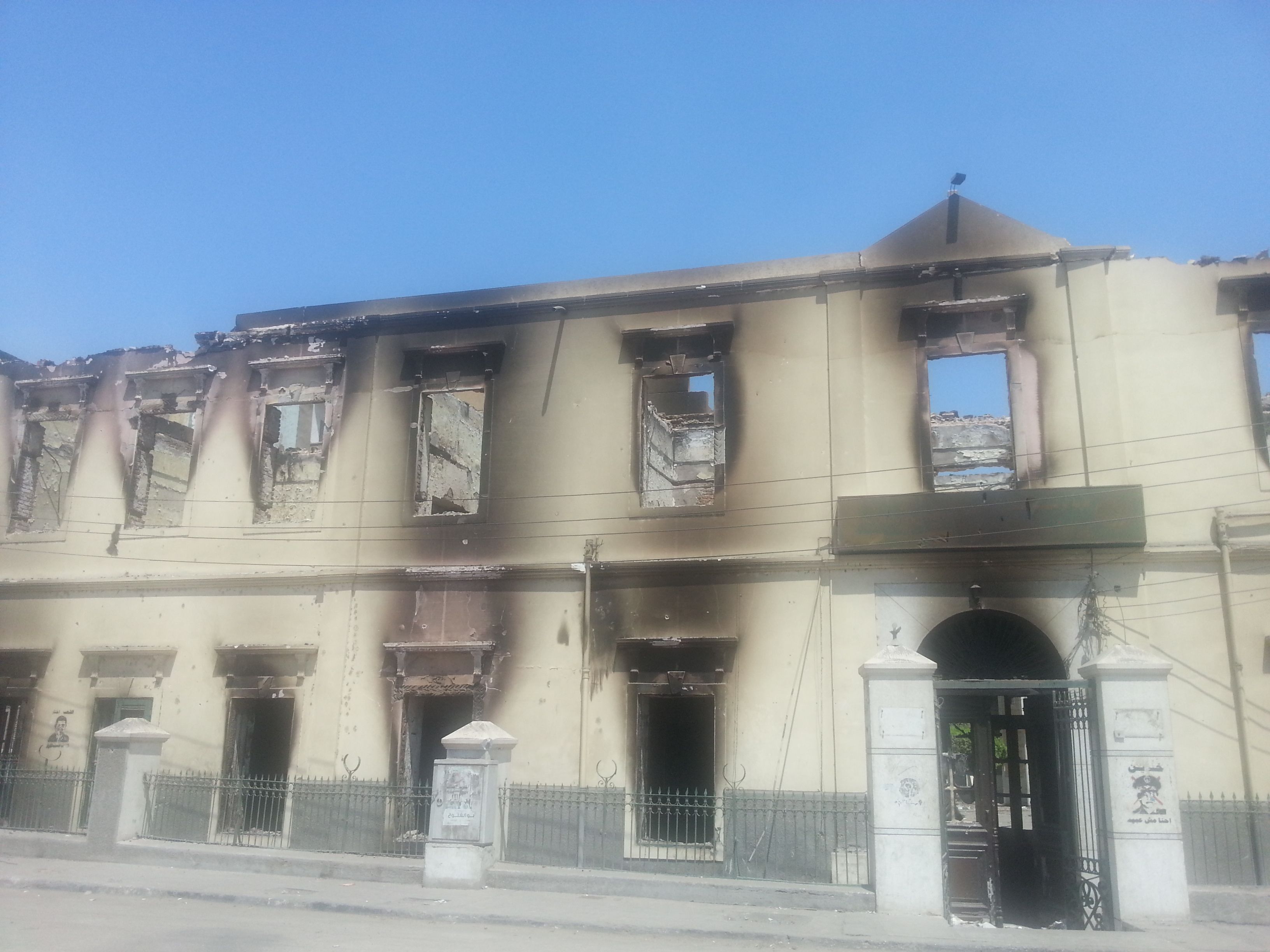 Rights organizations have criticized security and police forces for failing to protect churches and Christian establishments. But there was little criticism of either the police or military to be heard from Christians in Beni Suef — whether here or in the village of Diabiya where a fight over a speed bump culminated in the burning and ransacking of a church and Christian-owned homes and shops.

“The police couldn’t do anything. Their very police station was burnt,” Fahmy says.

Some 30 kilometers away from Beni Suef, the village of Diabiya is the scene of the wreckage of an anti-Copt attack.

Past an entrance to the village where children play and elders engage in afternoon chatter at their doorsteps, a wide half-burnt gate opens onto a burnt landscape.

On its right, the electric appliances shop of Amir Nasrallah has been reduced to rubble. As has the grocery shop of Farid Magdy. To the left of the gate, the house of Zarif Nasr, a man on a wheelchair, is in shambles as well. Nothing indicates what part was the living room, bedroom, or kitchen, for the fire has turned everything to ash. Gone in the fire is a whole set of new furniture and clothes that belonged to Nasr’s sister, Mariam, who was supposed to get married this week. She has had to delay her wedding indefinitely.

It all started when a group of Christians in the village built a speed bump near their home to decrease car accidents. When a Muslim man hit it, not knowing it was there, he started swearing at them and insulting their mothers and fathers. On August 10, a Muslim man known to be radical came in person to threaten the village church. The following day, as Christians went to Sunday mass, Muslims were already sending calls via mosques to attack them, Nasrallah recounts. 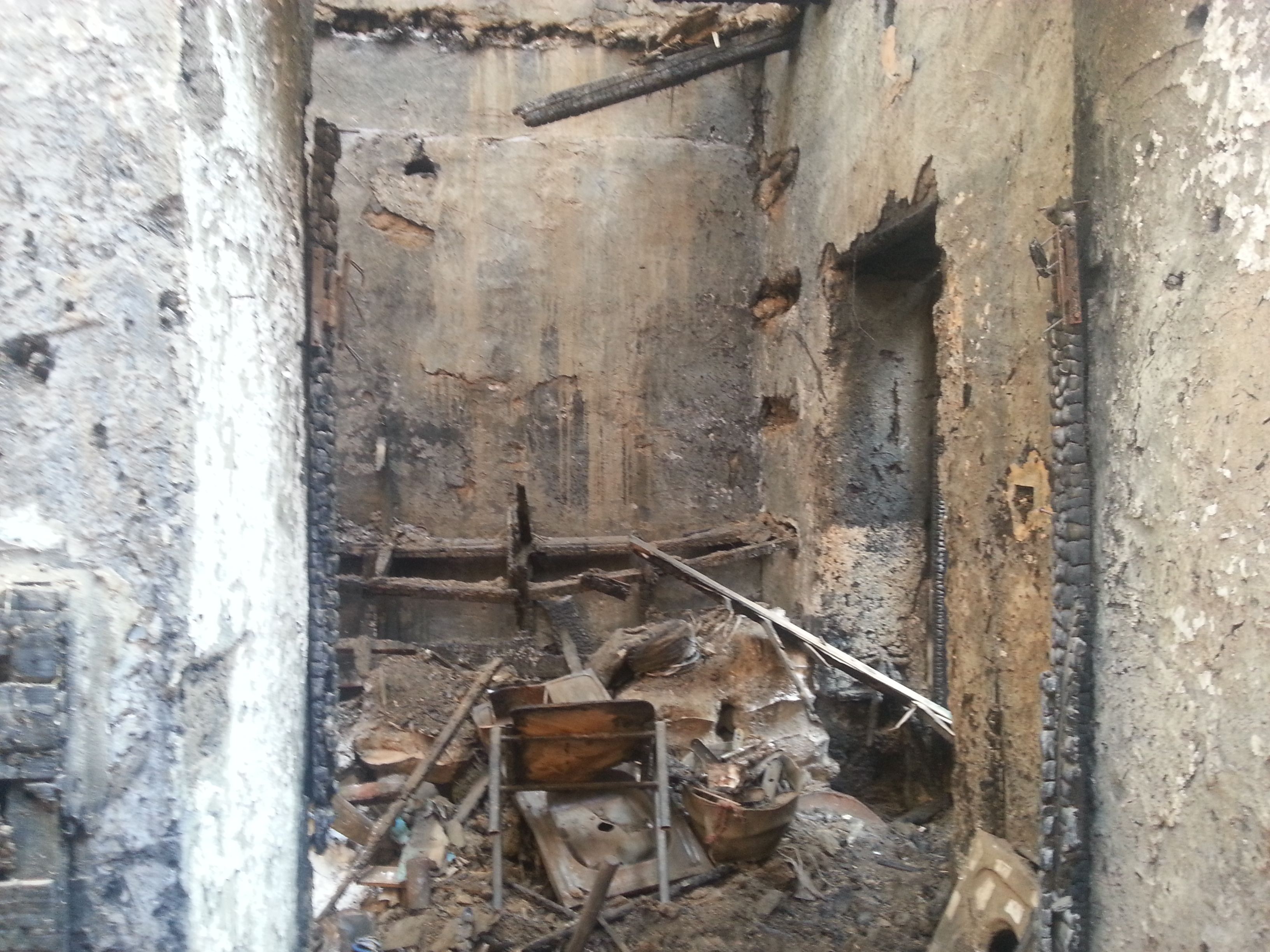 Like the clergymen of Beni Suef, these Christian families say that sectarianism is new to the village.

“There was no difference between Christian and Muslim. I used to sell equally to Christians and Muslims and sometimes I would be paid later by both,” says Nasrallah, who has nothing more to sell.

Nasrallah, 28, also recounts that two years ago, more Christians started flocking to the village as they saw opportunity at a time when regulations on building on agricultural land were lifted. He thinks that with the advent of Morsi to power, a year ago, tension started rising, especially given the wild campaigning they witnessed during the presidential elections.

Today, the 25-year-old church that championed the presence of Christians in the countryside stands as a relic of their oppression, as it lies burnt, looted, and destroyed.

It also stands as testament to broader trends. Ishaq Ibrahim, a researcher on freedom of belief and religion at the Egyptian Initiative for Personal Rights, says “We’re seeing an intensification of sectarian violence after 2011 and its adoption of different forms.”

One aspect of this is “the tendency to burn churches following a fight between a Muslim and a Christian. We didn’t see that before. Houses, people would be targeted in the aftermath of fights, but not churches.”

The use of mosques to mobilize and incite violence has also increased with the spread of Islamist groups during Morsi’s rule, Ibrahim says. The police confirmed to him that the mosque was used to mobilize people against Christians.

But unlike the clergymen of Beni Suef the city, the people of Diabiya speak of souring relations.

“When it comes to it,” Fawzi Habib, 62, says, “maybe about one percent of the neighbors will come through. And next time it might be worse; kidnappings of girls and killings.”

Om Girgis says that Muslims living near the church allowed the assailants to use their property to access the church. Mary, 13, who also helped put out the fire at the school, says she has Muslim friends at school. “But after this, I am not sure.”

For her and others in a situation like this, waiting for the police would not be all that different from waiting for Godot. Typically, on August 11, the police only showed up at the end of the violence.

“The police always come at the end. It’s their nature. They have no ability to control,” says Magdy, who is still paying installments for the fridge he bought for his burnt grocery store.

Accordingly, the village resolves its disputes autonomously. After the violence of August 11, the elders of the Muslim and Christian community gathered again and signed “shoratat,” a paper that commits each side to pay up to LE1 million if it mobilizes violence against the other.

Moreover, the people of Diabiya are set to establish a “mi’aad,” referring to a deadline whereby losses are estimated and compensated, although Nasrallah’s father is skeptical of the whole process. Indeed, he repeatedly and desperately asks these reporters “Do you think we should go for the mi’aad?”

And perhaps it is powerlessness leaves them with little options. Nasrallah’s father says he went to file a complaint at the police station in Wosta, the city to which Diabiya is affiliated, the following day and found it “totally burnt.”

Yet there is little anger towards the police for failing to appear.

“Who knows why the police didn’t come. Something may have delayed them on the road, you never know. We had to put out the fire ourselves,” says Om Girgis, a mother of four.

There seems to be less resentment that the police cannot be relied upon than resignation — as if it is an accepted fact for these people that they are not a priority.

Noura Magdy, 26, is not hopeful that the church will be rebuilt. “They have lots of other priorities. So many churches have been destroyed. Why would ours be rebuilt? I don’t expect anything from the police or security. Maybe the army.”

But Magdy’s resignation about the loss of a church was countered by a nationalistic tone that is not unrelated from the prevalent discourse that followed Morsi and the Brotherhood’s ouster from power. “If they destroy the churches, so what,” Farag says defiantly. “If this is the price to be paid for the birth of a new country, we are happy to pay it.”

Nasrallah’s father, however, isn’t happy to pay that price. “We should not be the ones paying the price [for cleansing the country from the Brotherhood,” he says, adding that his other son, an army conscript, was injured in recent clashes with Brotherhood members in Cairo. One person had told him to hide his tattooed cross because if angry Islamists saw it, they would kill him.

Yet Farag’s optimism stems from a belief that the country has already passed through the “dark tunnel of religion.”

“A strong state does not need religion to rule. The religion of the state should be the law,” he says, enthusiastic, alongside Fahmy, about the military and the returning State Security’s ability to restore order. Fahmy cites approvingly the arrests and detention of leading figures and supporters of the Brotherhood, reading it as a move to protect Christians and Christian establishments. “[Armed Forces Chief Commander Abdel Fattah al-] Sisi is a mukhabarat [intelligence] man; he knows how things work,” he says.

But back in the village, there seems to be less enthusiasm about the mission to save the country from Islamists. “People are calming down now, but those who are silent, their eyes say things,” says Habib.

“Before, we used to say the bad gets lost in the good,” he adds, “but now everything seems to be bad.”

Topics
Related
attacks on churches
Out of sight, out of mind
Sarah Carr | MINYA – It was the same scene everywhere: blackened walls, floors littered with detritus, empty