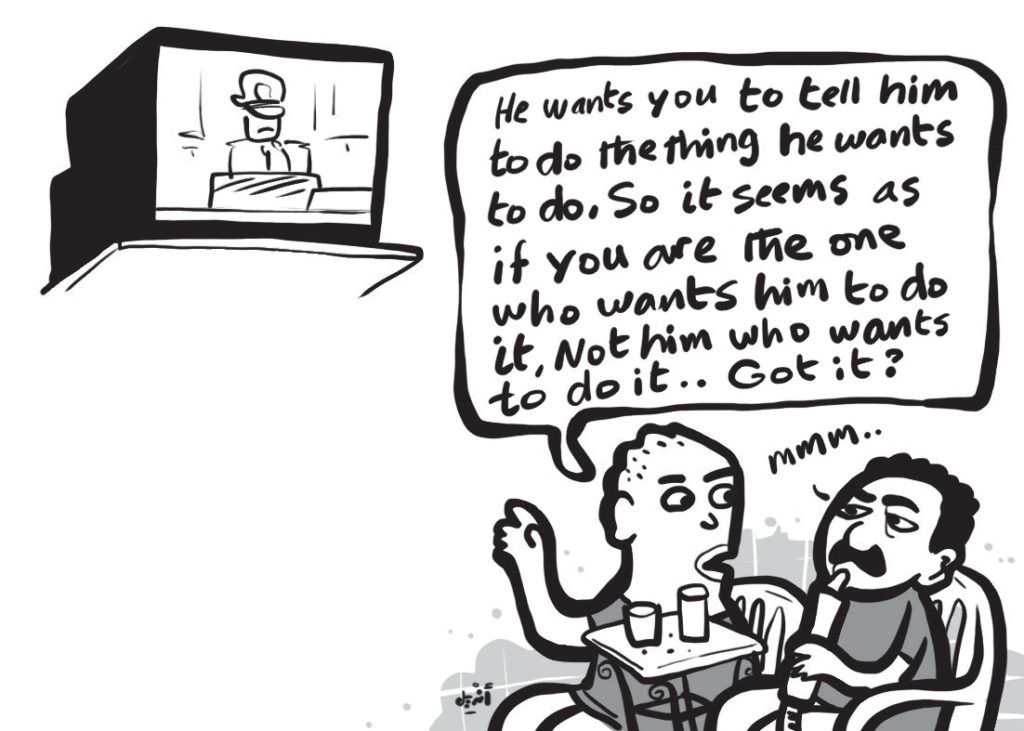 In an unexpected statement from Defense Minister General Abdel Fattah al-Sisi on Wednesday morning delivered at the graduation ceremony of the Military College, he declared, “I say to Egyptians, we lived up to your expectations and everything you asked for we executed. But I call on all honorable Egyptians next Friday to take to the streets and authorize me to confront probable violence and terrorism.”

Sisi’s speech comes after five days of violence between supporters and opponents of deposed President Mohamed Morsi, removed by the Armed Forces on July 3. Some 18 people have been killed and hundreds injured in the violence. The majority of commentators have observed that intervention by security forces and the army in these clashes has been minimal.

During his speech, Sisi made the unprecedented request that the public rally as they did on June 30 in order to give him the green light to confront Islamists and members of the Muslim Brotherhood suspected of initiating violence against Morsi opponents in the past few days.

While initial signs indicate wide approval amongst the general public for Sisi’s call, observers differ about the seriousness of his message from a political standpoint. They raise questions about what the military are seeking to gain, given that this moves risks resulting in fresh clashes.

Khaled Abdel Hamid a political activist says, “I don’t believe that the military and the police actually want authority from the public to confront terrorism. This is simply a clear message to the international community in order to respond to marches staged by Morsi supporters calling for his reinstatement.”

“It is a political tactic,” he continues, “but it should be done carefully or if not it poses a risk to political and social freedoms if the army insists on getting rid of Islamists purely for the sake of getting rid of them …The decision to use force has to be studied well because of the sensitivity of the current situation.”

In his speech, Sisi made reference to numerous details about his last meeting with Morsi only days before he was deposed, saying that he gave Morsi more than one opportunity but that he did not take advantage of this in a way that “realized national harmony.”

“I repeatedly told the former president that the Egyptian Armed Forces is for all Egyptians and unites all groups, and that it will be under his control and nobody else’s. I didn’t fool him and say, ‘we are with you as you wish,’” Sisi said in the speech on Wednesday.

Sisi continued, “I sat with him before he gave his speech in which he reviewed his first year as president and requested that he include in the speech expressions that encourage reconciliation. He promised he would. But he said words that completely contradicted what we had agreed to and which increased rivalries.”

Hisham Hellyer, a nonresident fellow with the Project on US Relations with the Islamic World at the Brookings Institute believes that Sisi’s statement is the second part of the defense minister’s message to the Muslim Brotherhood, and is aimed at starting negotiations with regard to the Brotherhood’s positioning in relation to the political process in the coming period.

“It seems that the army are giving the Muslim Brotherhood another chance, by allowing the Freedom and Justice Party to take part in politics in return for their dropping the demand that Morsi be reinstated, and stopping violence in order that they accept the new rules of the game,” he explains.

“Sisi was smart enough to again use the street protest card in order to demonstrate that the chances of the Muslim Brotherhood returning to power are dismal, and that if they resort to violence they will be dealt with, with authorization from the street. If they stage demonstrations calling for Morsi’s reinstatement the majority of Egyptians will be against this, because in reality when the Brotherhood call for demonstrations, 15 percent of Egyptians at most turn out. When the military calls for protests, 85 percent of people will respond,” Hellyer says.

The Muslim Brotherhood and its Freedom and Justice Party has announced a plan to hold protests in coming days, not unlike the military’s reliance on public mobilization.

Freedom and Justice Party member Amr Darrag said in media statements that Morsi supporters will continue to organize street protests and will try to disrupt everyday life with the aim of forcing the military to commit a mistake and respond with violence. As such, the Brotherhood’s position that the events of June 30 and the following few days amounted to a military coup is seen with more favor within the international community.

“Morsi’s supporters have issued threats to burn down and attack government buildings in the coming days,” he says. “How can Sisi remain silent in the face of that? He wants to counter this violence aggressively, based on authorization from the people. This decision is correct. Let me also add that Sisi won’t call for them to take to the streets on Friday without a plan to protect their wellbeing.”

Topics
Related
attacks on police
Daqahlia Security Directorate attacked
The office of the general prosecution has ordered an investigation into a bombing outside a Delta police
Mohamed ElBaradei
Politicians respond differently to violence
In a statement to local media, spokesperson to the presidency Mohamed al-Moslemany said that Egypt won’t
Mohamed Morsi ouster
9 killed in overnight violence across Egypt
Egypt witnessed a night of violence between Monday and Tuesday as deposed President Mohamed Morsi’s