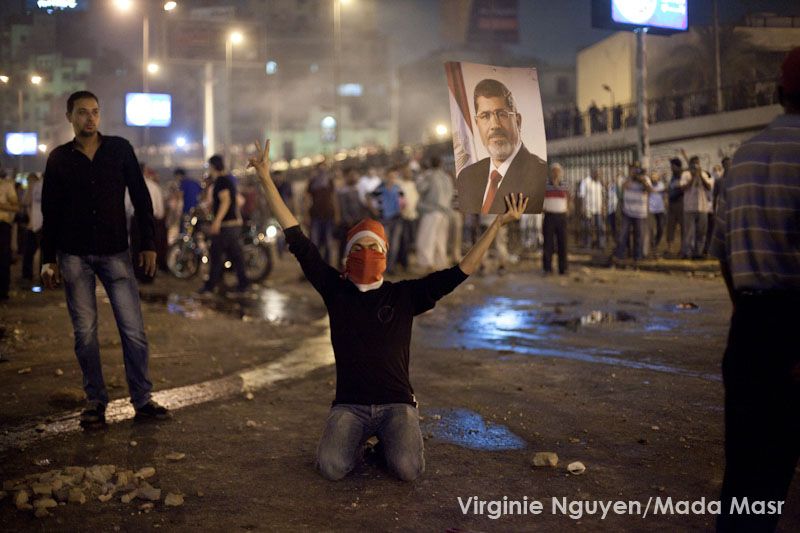 With the approach of “zero hour” — the end of the deadline given by the Armed Forces for political forces to find a solution to the current crisis — protesters in rival camps remain polarized.

At Rabea al-Adaweya, thousands of pro-President Mohamed Morsi protesters have been camped out for over a week.

Twenty-year-old Al-Azhar student Gehad Ashraf came from Monufiya to join the sit-in four days ago. Dressed in a cap and padded black vest alongside many many others similarly wearing helmets and holding plastic rods or wooden sticks, Ashraf was defiant about Morsi’s right to rule.

“Although I am not satisfied with Mohamed Morsi’s performance in the past, that does not make me want to tell him ‘leave!’ I am here to support the principle of legitimacy and not the person (that represents that legitimacy)”, Ashraf said.

Om Abdel-Rahman, a 37-year-old lawyer and Muslim Brotherhood member was at the sit-in to “defend legitimacy.” She said that since Egypt voted for Morsi to stay on for four years, “nobody should blackmail me and call for early presidential elections”.

“If they want, they could run in the parliamentary elections, win a majority, and then form a government,” she added.

Haitham Sharaf, 25, from Monufiya, a student at al-Azhar University in Tanta who works at a pharmaceutical company, stood in a line of men forming a human shield shouting “Down with military rule! Yes, we are chanting against the military!” with some raising rods and sticks.

“I am waiting for the army to return and support the legitimacy (of the president). They don’t have another choice because otherwise, that means they can come and kill me. Either the army upholds legitimacy or I become a martyr,” he exclaimed.

“It will be over my dead body that the army returns. The president said that his blood is a small price for upholding legitimacy. Our blood does not have a higher price than that of the president,” Ashraf said.

At the demonstration outside the presidential palace held by protesters calling on Morsi to step down, schoolteacher Faten Mohamed shared her predictions for what would happen when the army deadline expires.

“I expect a statement by the army declaring Morsi ousted. I expect also a series of arrests of Brotherhood leaders. So we will see many decisions. I am not sure how Morsi will actually be ousted but he may be put under house arrest,” she said.

Ashraf al-Sawy, an engineer, said that Defence Minister Abdel-Fattah al-Sssi “entered history by intervening so I don’t expect him to disappoint us.”

Both Sawy and Rabab Abdel-Salam, an artist, anticipate violence.

“He is not going to go down without a fight. He is so persistent and there will have to be bloodshed. Nothing in what he does is presidential. So, we may hear a military declaration at 4:30 ordering him out of his post, and then hell will break loose at Rabea al-Adaweya,” Abdel-Salam said.

Topics
Related
Armed Forces spokesperson statements
To protect, not rule
Heba Afify | As a power battle simmers to the brim between the military and the presidency, exchanging messages in