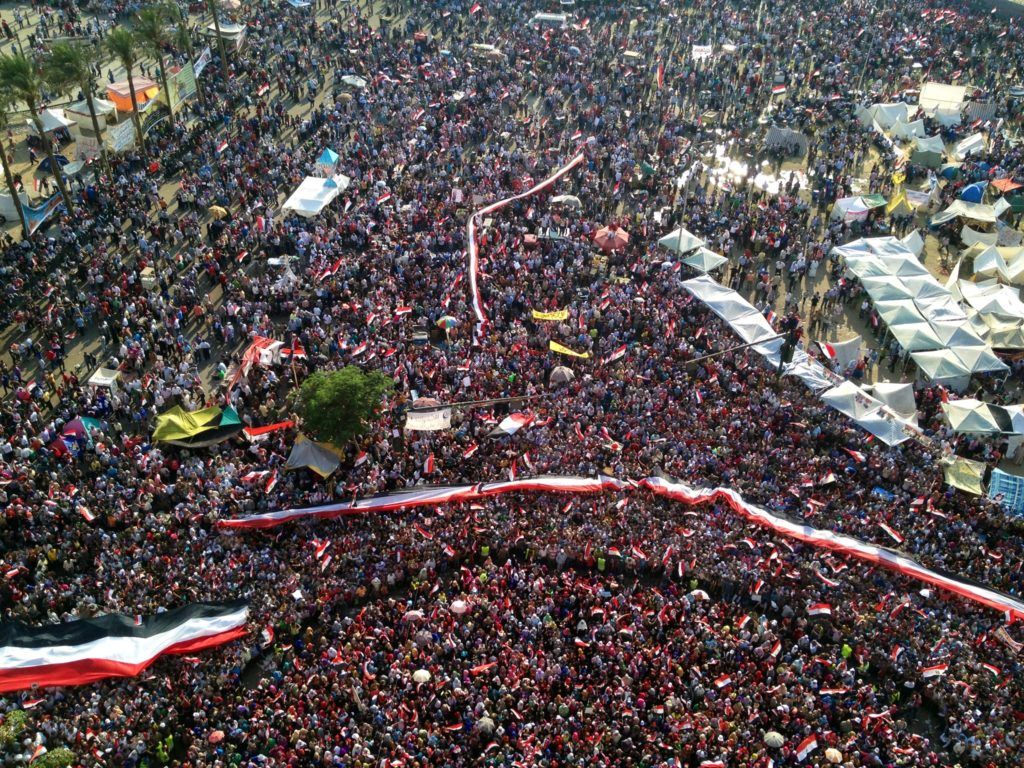 The massive crowds at Ettehadiya Presidential Palace erupted in celebrations as soon as the head of the Constitutional Court was declared interim president — and the rest of the statement by Defense Minister Abdel Fattah al-Sisi was drowned out by the sound of constant fireworks.

People huddled around cars to listen to the statement from the army on the radio. “Tonight there is no Brotherhood,” they chanted, and one protester announced, “The nightmare is over.”

The festivities were reminiscent of the celebrations that broke out on 11 February 2011 when Mubarak stepped down. The chant “the people brought down the regime” that was invented that day was revived.

But at Rabea al-Adaweya sit-in, supporters of the now ousted President Mohamed Morsi begged to differ.

Morsi himself addressed protesters there, eyewitnesses said, through a recorded televised speech claiming that he remains the president of Egypt.

As one protester said, “I will continue in this sit-in until Sisi comes out and apologizes. I do not acknowledge that Morsi has been removed from his post.”

Reemy Abdel Khalek, who was celebrating at the Ettehadiya Palace, said Morsi supporters should accept the changes and go home.

Egypt is “now finally clean,” she said, adding that she had been counting on the army to resolve the crises and they did not disappoint. The Muslim Brotherhood should now be excluded from the roadmap and the political scene altogether, she added.

Joseph Fahim said the statement met all the protesters’ demands but the fate of Morsi remains to be seen. He added the army should clarify what will happen to Morsi “and his aides” adding that he wants them to be prosecuted.

“They should be tried in a civilian court first, followed by a military court over the soldiers whose deaths they caused,” he said.

While Fahim does not want the military to take over, he believes that whoever rules Egypt “should be a military man.”

“If he does a bad job, we will overthrow him too — it only took us three days to get rid of the Brotherhood.”

Gamal Ahmed was celebrating with his wife Iman Ali who said that all their demands had been fulfilled. She maintains that the Brotherhood should not be isolated from political life and that no faction should be excluded.

Ali also wishes to see reconciliation between the different factions of Egyptian society. “We are all brothers and sisters,” she said.

Her husband echoed this sentiment, saying the Brotherhood are part of society’s fabric. While they shouldn’t be in power, he said, they should be included nonetheless.

“Religion is one thing and politics is a whole different thing,” he added.”

At the Rabea al-Adaweya Mosque where Morsi supporters have gathered since Friday, the scene was the precise opposite throughout the day.

Some protesters who were prevented form entering the sit-in shouted, “Down with military rule.”

Shots were fired in the air causing people in the area to run, but shortly after the situation was calm.

After Sisi’s statement, Ahmed Ashraf, a 22-year-old accountant wearing a green headband with “Muslim Brotherhood” written on it, said, “The military have staged a coup against legitimacy and we will give our blood to counter this coup.”

Kamal Mohamed, 46-year-old cable company worker, said, “This is a coup against legitimacy.”

“The military took into account — in a skewed way — the opposition and disregarded the opposition despite them being a majority on the streets. We will continue with this sit-in until the end…We will live in the square until legitimacy is reinstated so the revolution is not stolen, and the blood of the martyrs doesn’t go in vain.”

Back in a packed Tahrir Square, where hundreds of thousands had gathered since the morning, roaring cheers and fireworks and waving flags set the scene for the celebration.

Ahmed Abdel Hamid, a 52-year-old accountant, said it was “smart of the military to hand over power to the SCC, to prove that this is not a coup, but a legitimate move based on people’s demands.

“Power was handed to the judiciary not the military.”

He also said that in 2011, SCAF made the decision to put themselves in power, but Sisi is smarter than Tantawi and will protect democracy.

“We want to stop demonizing the Brotherhood and incriminating them, but those who are accused of treason must be tried,” he added.

Awad Tharwat, 23, a street vendor, believes “Morsi left because he could not solve the fuel and energy problem. We could not earn our livelihoods due to Morsi’s failures.”

Ahmed Taha, 50, who describes himself as a Nasserist, claims that “30 June is the actual revolution, not the 25 January 2011 uprising, because we didn’t remove a dictator to put a terrorist in his place.”

Topics
Related
June 30 protests
Head of Constitutional Court announced interim Egypt president by army
Five hours after its set deadline, Defense Minister Abdel Fattah al-Sisi addressed the nation with a
Armed Forces spokesperson statements
Protesters remain polarized as army deadline draws near
Ola Galal | With the approach of “zero hour” — the end of the deadline given by the Armed Forces for political