Protesters fill streets and squares outside Cairo
By
Omar Halawa 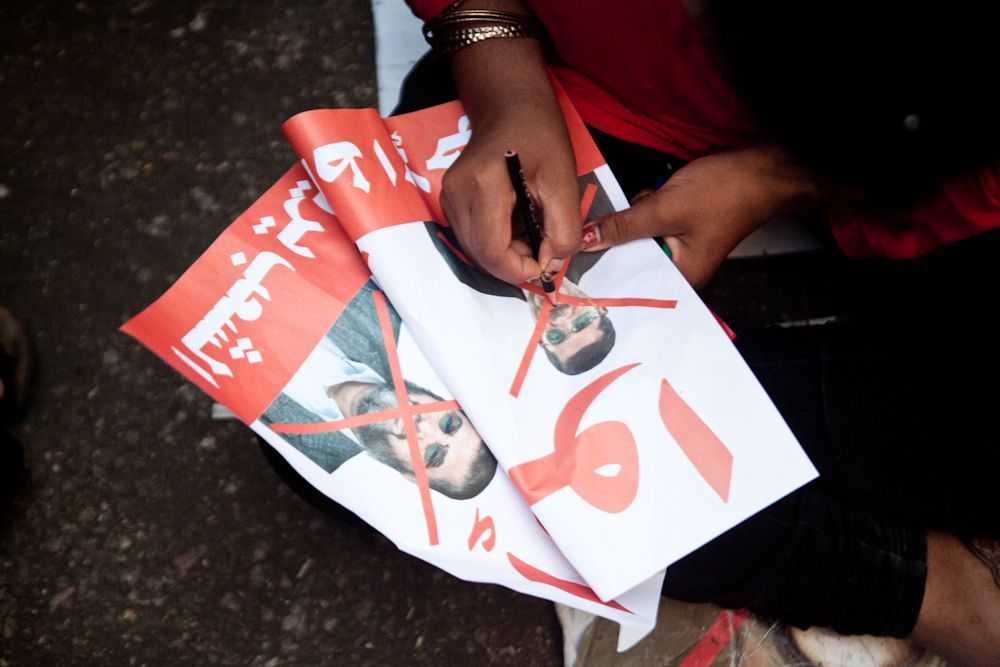 Protests took off outside of Cairo on Sunday as Egypt braced itself for nationwide demonstrations demanding the ouster of President Mohamed Morsi.

The call for protest was made weeks ago, alongside the Tamarod (Rebel) petition campaign demanding the Muslim Brotherhood-affiliated president step down and early elections be held. Tamarod campaigners said this week that they had obtained 22 million signatures, and expected this number to be reflected in a strong presence in the streets.

In Alexandria, protesters filled the Al-Qaed Ibrahim Mosque, the common site of demonstrations located in the city center. In the early evening, many marches had also arrived in front of a military headquarters in the Sidi Gaber district. “Depart” was a major chant throughout the protests.

Ahmad Yehia, a member of Alexandria’s Revolutionary Socialists, tells Mada Masr that today is step one. “It’s a successful day here in Alexandria, but I hope it continues in the coming days. The second step is to march to critical sites such as the city council and the headquarters of the governorate. This will frustrate the Brotherhood.” Yehia believes that a military intervention is possible, especially that Morsi is loosing his control over the state. “We don’t want the army, but we just need them to kick Morsi out and then begin a plan for the transition.”

Many protesters in Alexandria believe that today’s demonstrations are bigger than the ones held to oust former President Hosni Mubarak in 2011. “I didn’t feel this spirit since January 25 [2011]. All Egyptians should go for civil disobedience so we can bring down the regime. We need at least a whole week to succeed,” says Hesham Shafiq, 24.

The coastal city was the site of violent confrontations between Brotherhood members and their opponents on Friday. Muslim Brotherhood sources said that their headquarters there were attacked during the clashes. Local media reported that three people were killed in the violence.

Attacks on the Muslim Brotherhood’s Freedom and Justice Party headquarters were also reported on Sunday in the Upper Egypt city of Beni Suef, according to Al-Ahram. Further south, the main Hawara tribe of Qena had announced its participation in peaceful protests, according to the state-run Middle East News Agency. Dissent in Upper Egypt against Morsi comes following overwhelming support during the presidential elections last year.

In Mansoura, a major Delta city, anti-Morsi protesters gathered in Thawra Square and elsewhere. Mansoura was less of a stronghold for Morsi a year ago during the presidential elections, but recently has also become a site of ongoing clashes between his supporters and opponents. On Wednesday the violence left at least one dead.

Lawyers and court employees were at the forefront of the protests in Mansoura, as they gathered in front of the Mansoura Primary Court. Ahmed Ramadan, a lawyer and former member of the April 6 Youth Movement, accuses Morsi of violating the Constitution by single-handedly appointing a subservient public prosecutor. “Today lawyers come out in their black coats, mourning the violation of justice and demanding the return to the rule of law,” he tells Mada Masr.

One of the marches were led by Mohamed Ghoneim, co-founder of the Dostour Party, chanting and engaging with the youth as the march moved on. Army helicopters were hovering at low altitude.

Some observers suggest that while expectations of violence at the nationwide protests vary, the intensity would likely be greater outside of Cairo, where there were ongoing clashes throughout last week.

Topics
Related
Ettehadiya Presidential Palace
Cairo braces for a day of protests and marches
Cairo’s squares and streets are filled with anticipation as people are getting ready for a day
Armed Forces spokesperson statements
The view from the palace’s window
Mohamad Salama Adam | From the presidential palace’s window, the view ahead of the planned June 30 protests is different.
child abuse
The children of the revolution
Dalia Rabie | A few meters away from raging battles between protesters and security forces on Qasr al-Nil
Cairo bombings
Legitimacy reinvented
Naira Antoun | Koshary and sweat mix with diligence and optimism in the downtown headquarters of the Tamarod campaign,