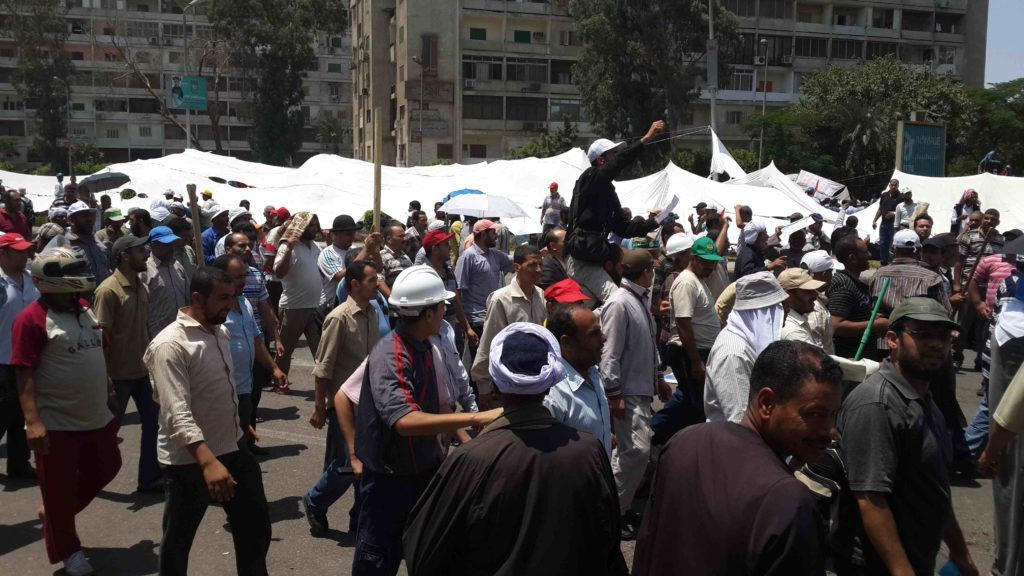 In an effort to protect the sit-in at the mosque, throngs of Muslim Brotherhood supporters blocked roads leading to the area. Many wore helmets and carried various types of rods, sticks and shields at entrances to the sit-in. Standing several lines deep, they said they expected an attack from “thugs.”

This fear of attack ran deep enough that the sit-in formed its own defense and training committee.

Mohamed Yehia, a pro-Morsi protester, explained that the defense and training group is responsible for the security of the sit-in. This committee sends a “message to the media to terrorize anyone who dares to attack pro-president supporters,” he declared.

Yehia claimed that those participating in the protest are not only Muslim Brotherhood members, but Egyptians from all walks of life, including Christians. All of them are here to protect the legitimacy of the elected president, he said.

The assembled protesters came from governorates across Egypt, and most of them said they belonged to the Muslim Brotherhood, although the Jama’a al-Islamiya was also responsible for mobilizing some of the demonstrators.

A group of protesters standing close to a stage set up near the mosque chanted pro-Morsi slogans. They declared that Egypt would stay Islamic, despite the will of all seculars.

“The caliphate! Empowerment!” some chanted, while others chanted, “Strength, determination and faith.”

Many of the protesters told Mada Masr that they came to the protest to protect the legitimacy of the elected president. If ousted, the road to democracy would be obstructed, some said.

Protesters also bashed the Tamarod (Rebel) campaign, which claims to have collected 22 million signatures demanding Morsi’s ouster. If the campaign did so well, they should just partake in parliamentary elections and secure a majority, they said, adding that state institutions should not be destroyed.

Topics
Related
June 30 protests
In Tahrir, protesters out to save the state
Maha ElNabawi | A few thousand gathered in Tahrir Square on Sunday morning, where a festive mood reigned ahead
Ettehadiya Presidential Palace
Cairo braces for a day of protests and marches
Cairo’s squares and streets are filled with anticipation as people are getting ready for a day
Armed Forces spokesperson statements
The view from the palace’s window
Mohamad Salama Adam | From the presidential palace’s window, the view ahead of the planned June 30 protests is different.