Army is the only answer, say MoD protesters
By
Sarah Carr 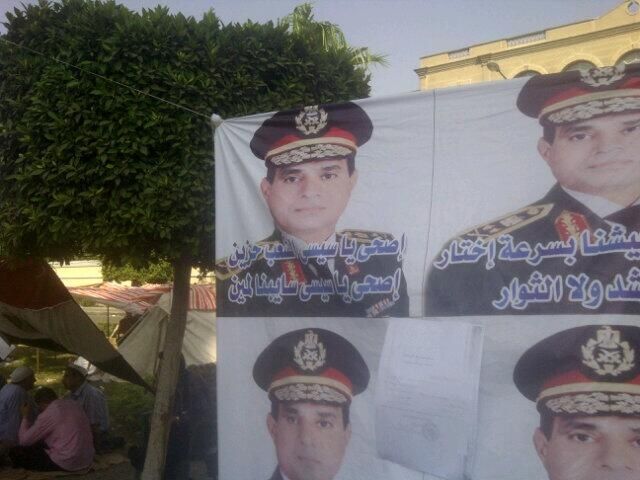 Protesters calling for President Mohamed Morsi’s resignation descended on the Ministry of Defense on Sunday afternoon, in what is their most direct appeal for military intervention yet.

A man in an army uniform and another in police clothes where hoisted onto protesters’ shoulders, who chanted “the army and the people are one hand.”

Some present at the demonstration claimed only the military could undo the damage Morsi had done during his presidency.

Morsi must be removed because “he has ruined the country,” Amir Mohamed al-Sayed tells Mada Masr.

Hussein Zaki agrees. He says that initially, he had supported Morsi and voted for him in the presidential elections, but lost faith in him four months again when what Zaki calls the “Brotherhoodization” of the state began, as Morsi appointed Brotherhood members or sympathizers to government posts.

“The problem is that he isn’t even appointing capable or trustworthy people,” Zaki alleges.

“Morsi hasn’t kept a single promise he has made,” concurs protester Mohamed Ali. He refutes arguments that Morsi had been legitimately elected, alleging fraud in the polls that brought him to power.

“And what about all these millions of people in the street? Don’t they represent legitimacy?” adds Sayed.

When asked what kind of message a protest outside the Ministry of Defense sends, Ali says he doesn’t want to see the military return to politics, and the military itself doesn’t want that either. However, the Armed Forces are the only ones capable of overseeing the transitional period following Morsi’s rule, Ali argues.

Ali wants to see a presidential council composed of the head of the Supreme Constitutional Court, Minister of Defense Abdel Fattah al-Sisi and the Al-Azhar Grand Sheikh. This council would be responsible for drawing up a new constitution, electing new MPs and, finally, a new president.

The Muslim Brotherhood would be allowed to take part in politics, but would not be allowed to hold ministerial positions, Ali proposed.

For his part, Sayed is optimistic about the possibility of removing Morsi from power.

“We’ll get rid of him just like we got rid of others before him,” he says confidently.