Gold Rush in the Desert
By
Françoise Beauguion

Gold has been mined in the deserts of southern Egypt since ancient history. The Kerman kingdom used slave labor in mines to become the primary source for gold in the Middle East. In 2009, the modern Sukari Gold Mine opened and returned industrialized gold mining practices to the Eastern Desert. But since Egypt’s  25 January revolution, many individuals have taken the opportunity to strike out on their own and search for fortunes in the sand. Photographs and text by Françoise Beauguion. 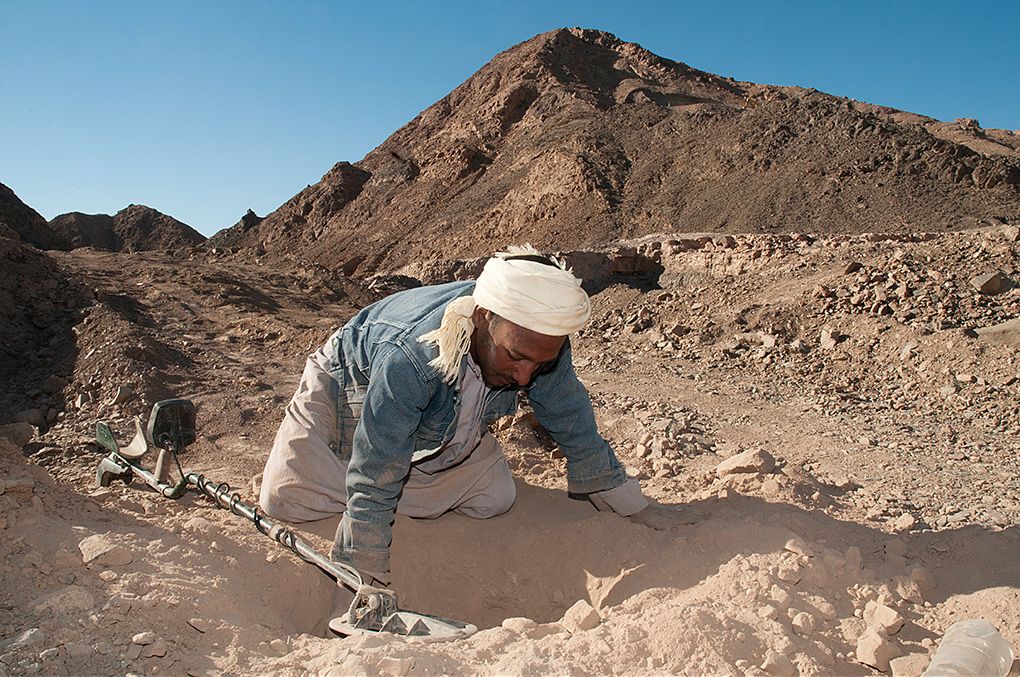 Gold mining around Daraw is a recent trend. Since the revolution the police have been busy securing other strategic points in the country and they left the surrounding desert under-guarded. 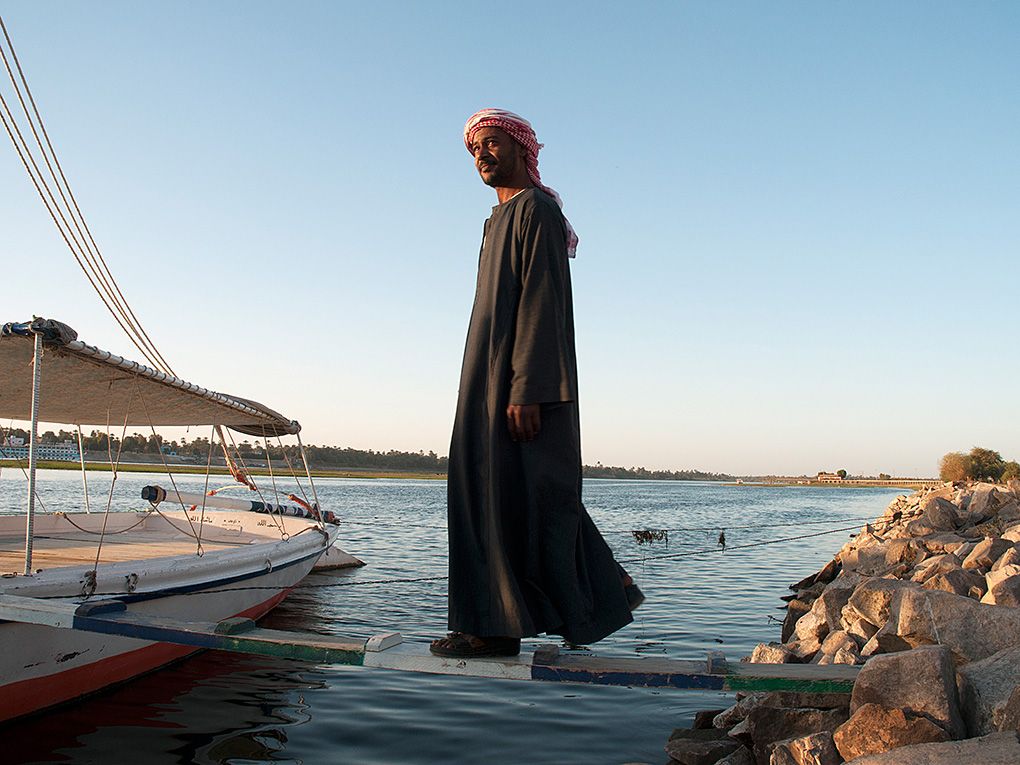 Thirty-year-old Yasser's job is to guard a felucca in Daraw, a small city one hour of Aswan. He spends his days on the Nile taking care of the boat. But since the revolution and the subsequent tourism crisis, his position has become much more precarious. 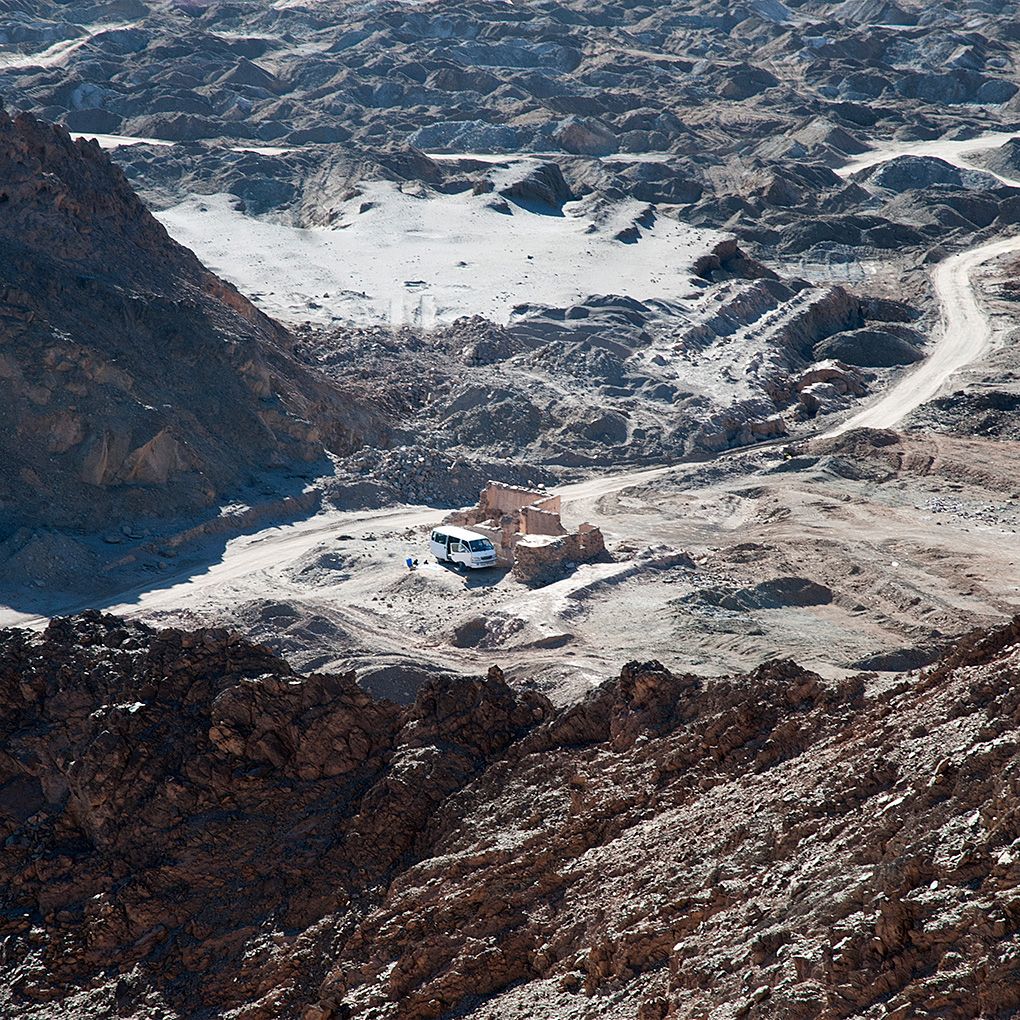 Yasser and his friends go to on trips into the Eastern Desert once a month, out between the Nile and the Red Sea. They are organized: One rents a 4x4, the other brings the tent and another one buys food. 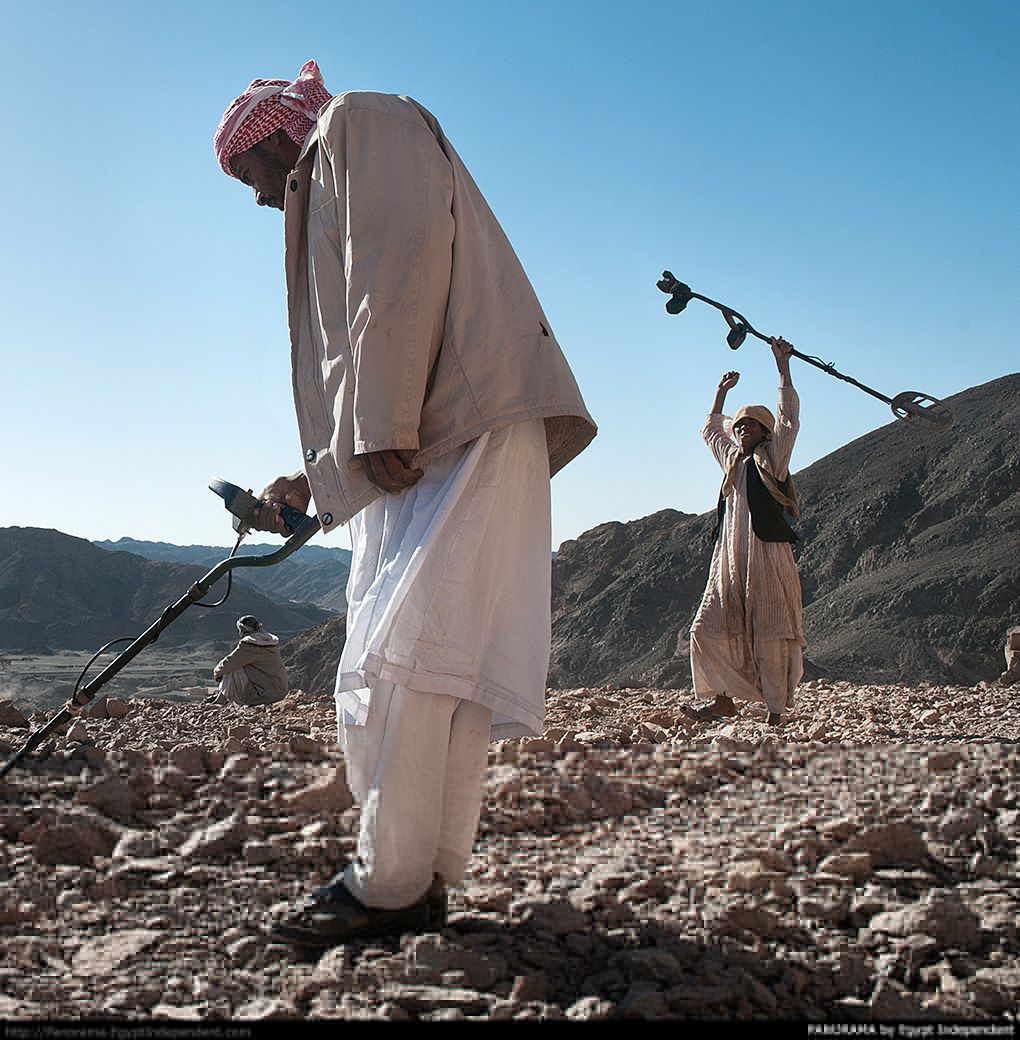 Most of the miners know this won't last forever. There is already news that new laws and regulations may be passed. 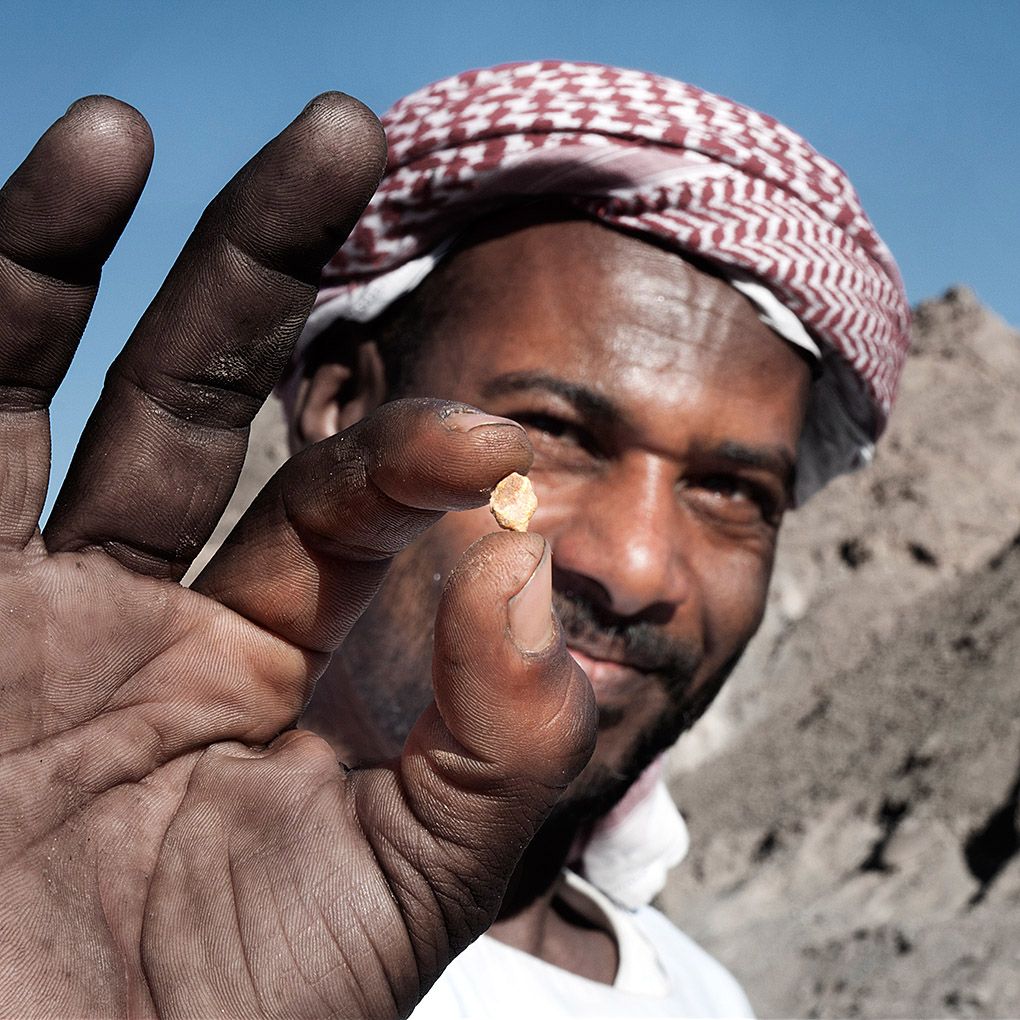 Large nuggets of gold are rare, but when they are found, they are sold in Aswan. 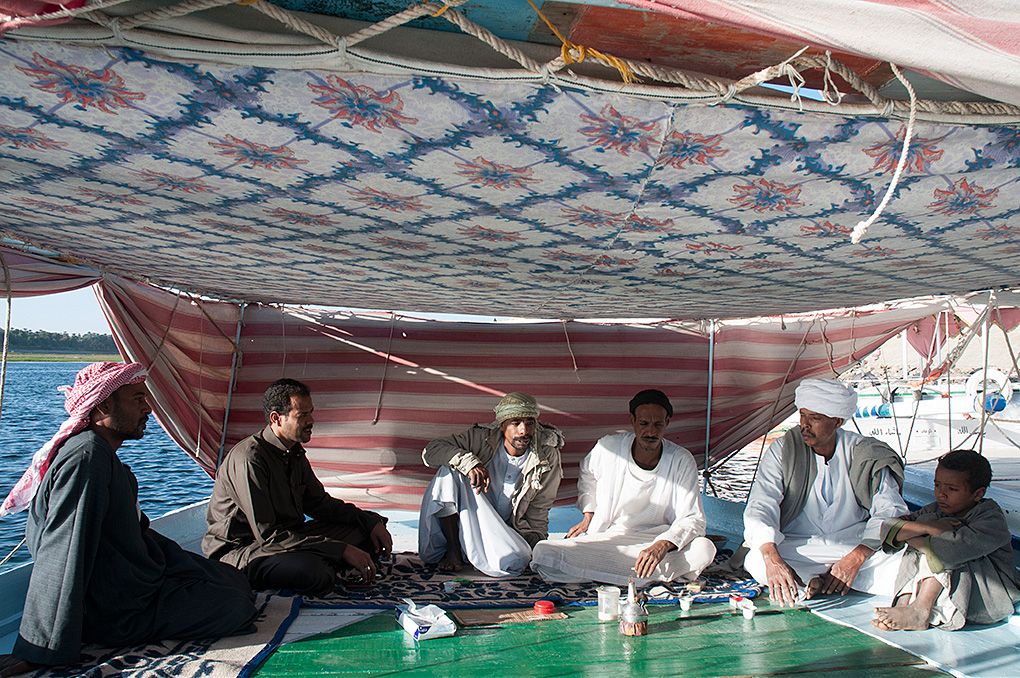 Before a trip, Yasser and his friends gather on a felucca to discuss logistics. Yasser started searching for gold as a hobby, taking trips into the desert with his friends. This hobby become profitable, and soon became a full-time business. 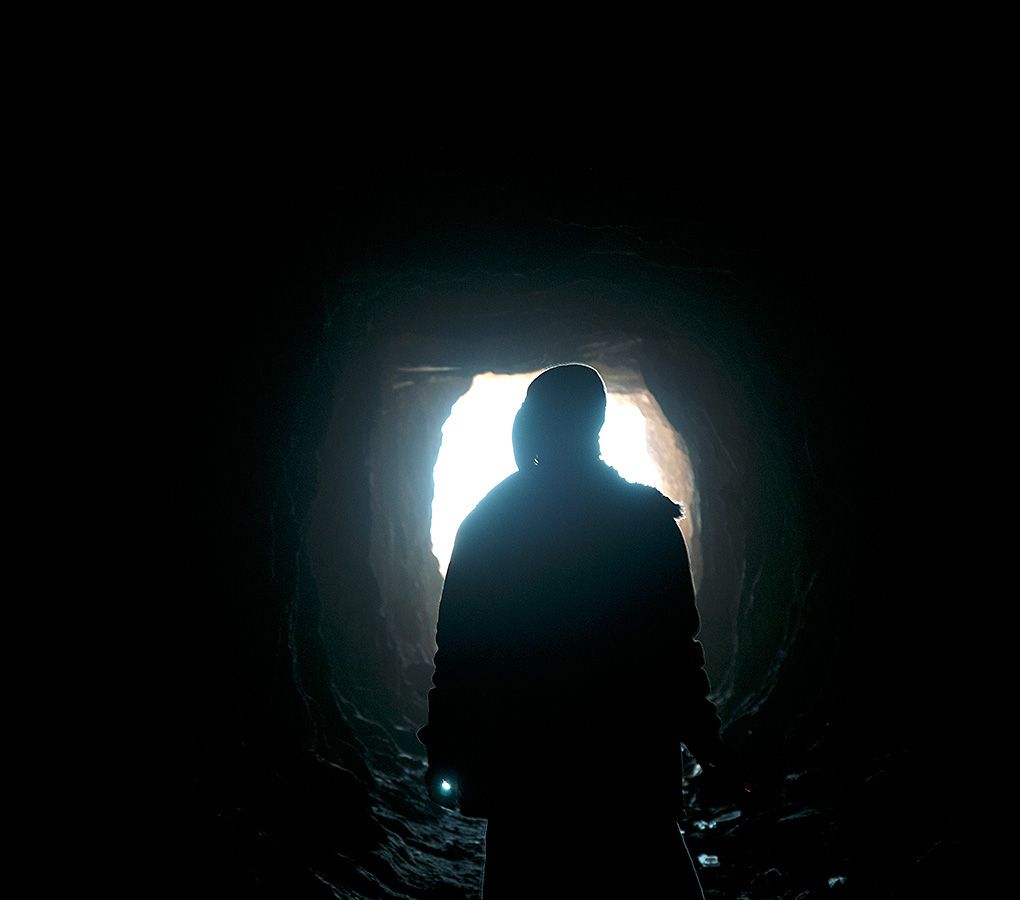 While most of the exploration is done on the surface, the miners sometimes dig tunnels deep  into the mountain to retrieve ore. 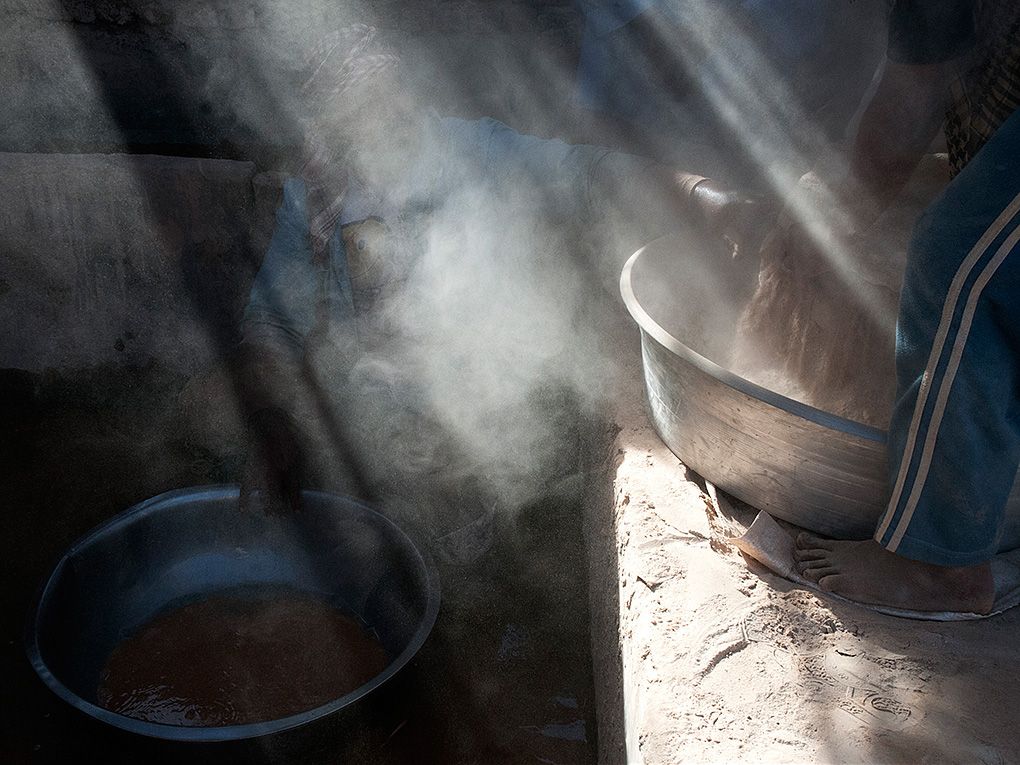 Rocks are ground down into a fine sand so that the smallest particles of gold can be separated out. 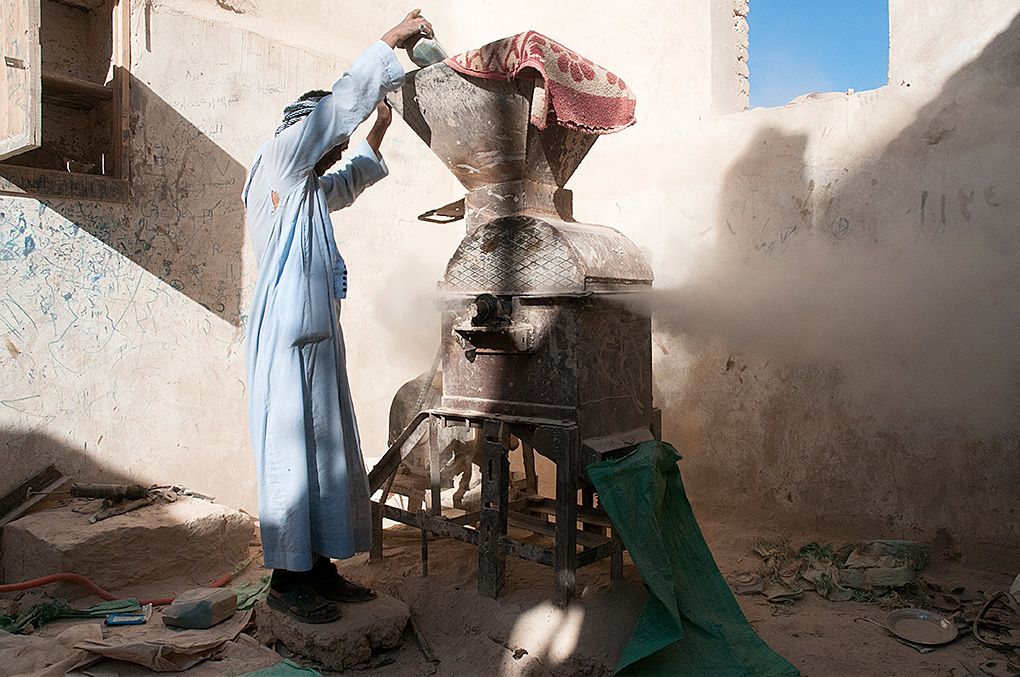 A rock-crushing machine spews sand and dust so that the gold can be separated from rock. 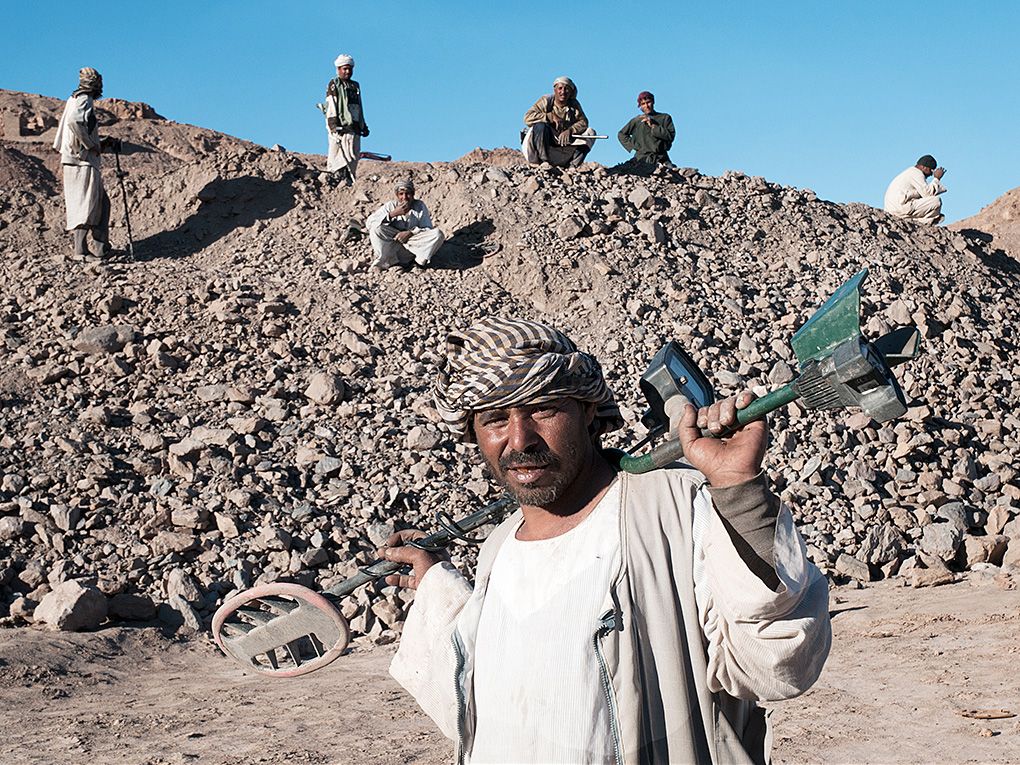 Around Jabal al-Sukkari, or Sweet Mountain, there are now hundreds of Egyptians looking for gold. They carry their metal detectors with pride, like rocket launchers on their shoulders. 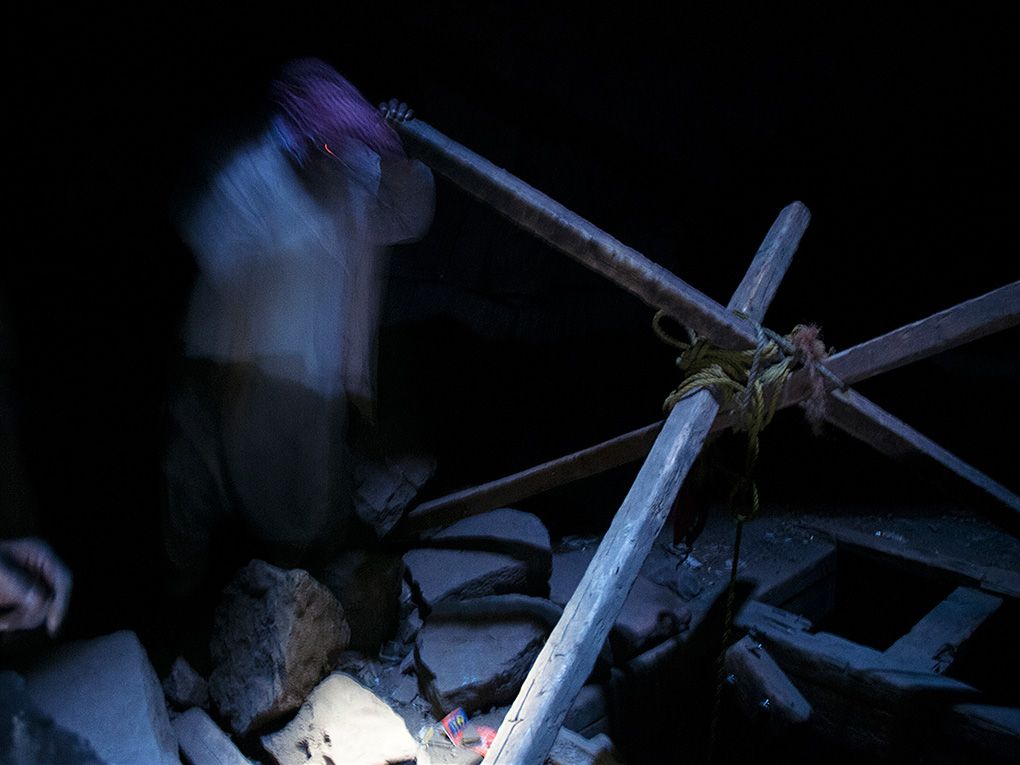 Working underground can be quite dangerous, as there is little light and the danger of collapsing mine shafts. 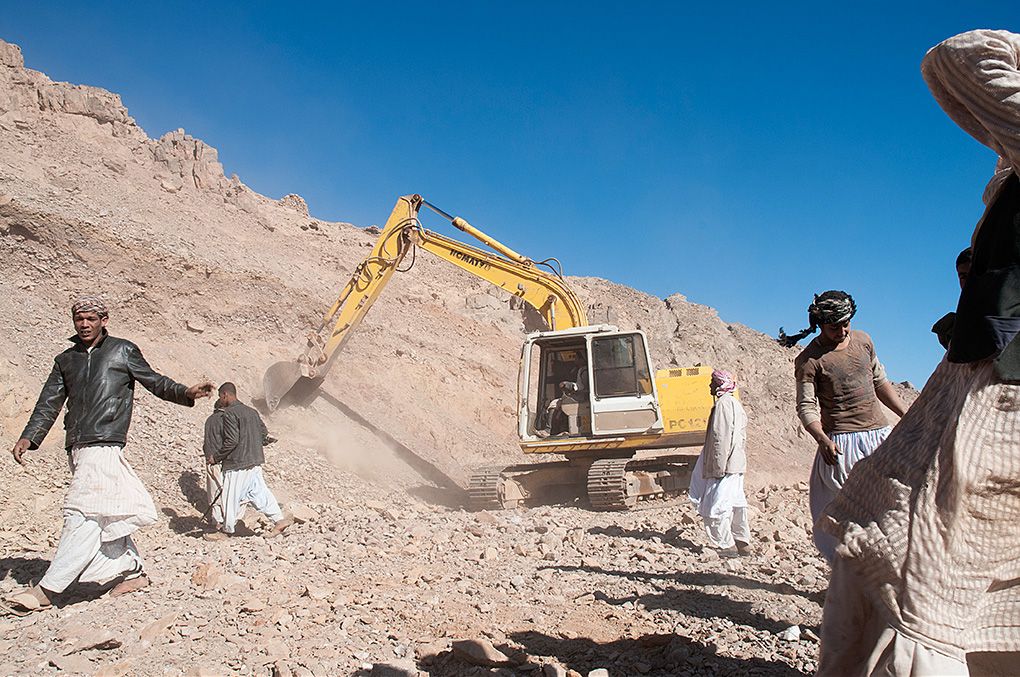 When the searching is successful, the groups pool their money and rent large equipment to help in the search. 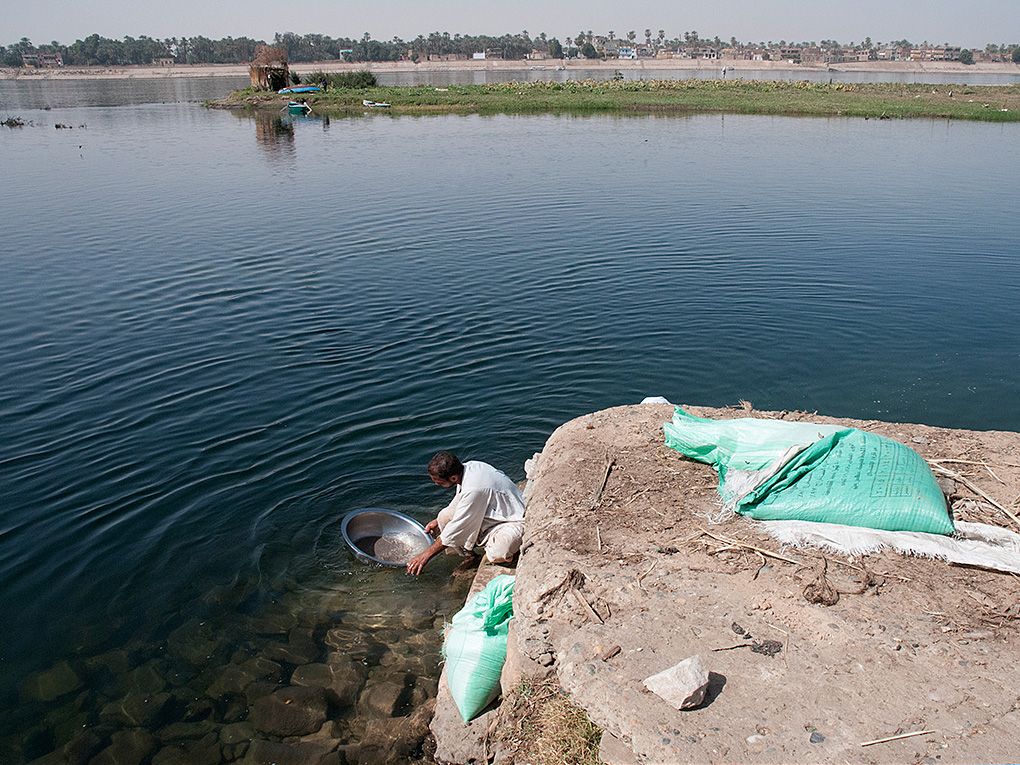 Gold is much heavier than the surrounding sand, so when it is mixed with water, the sand can be washed away, leaving flecks of gold in the bottom of the pan. 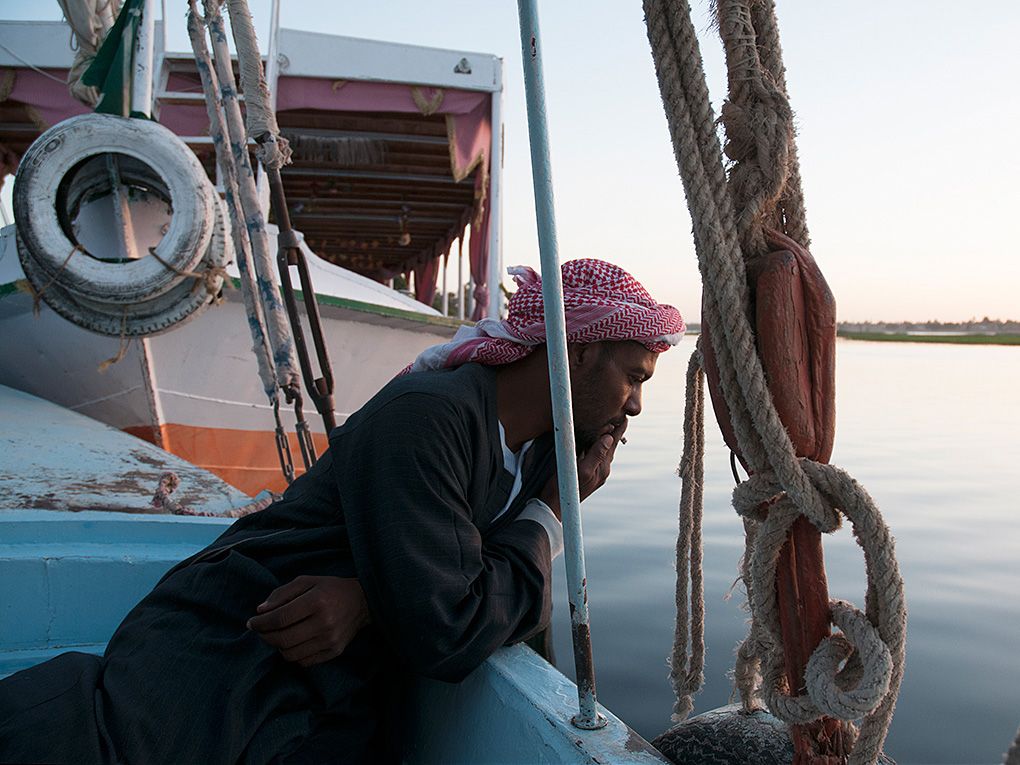 Yasser and his partner will take five- to six-day trips into the desert every few weeks. The rest of the time, he returns to his other job of guarding a felucca. 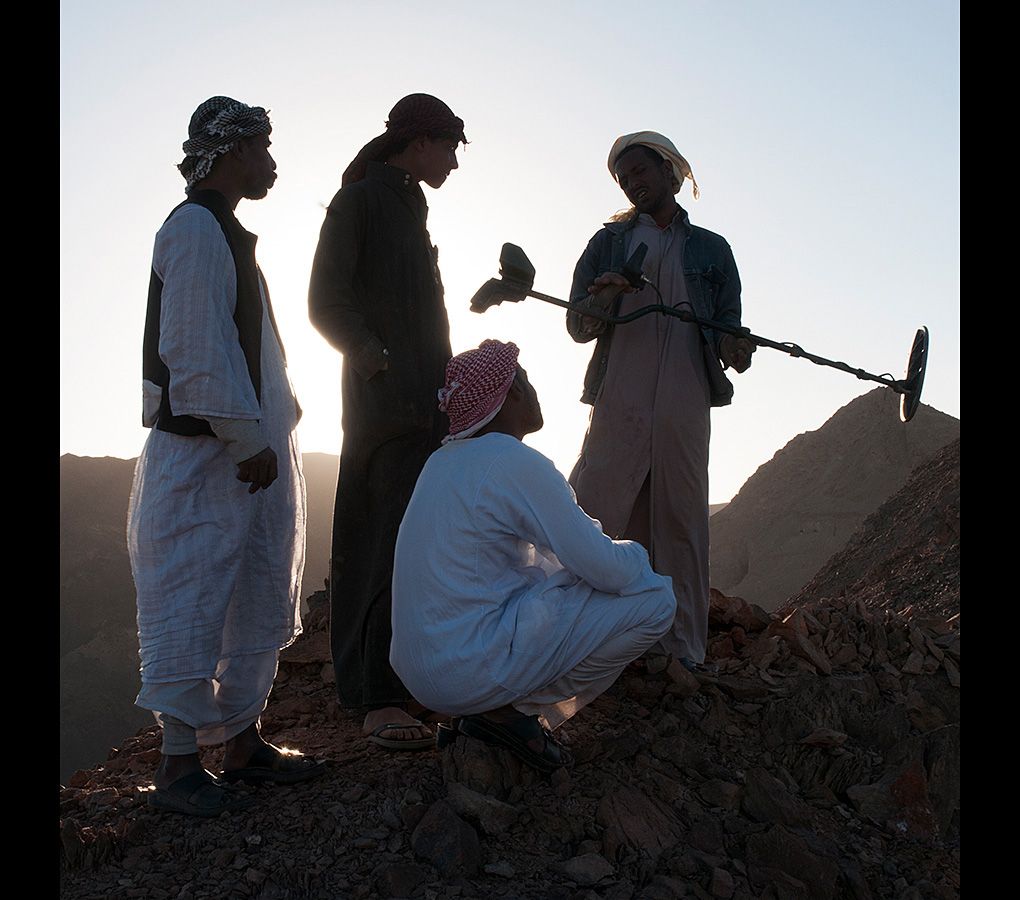 Since the police presence in the desert had dwindled, it is much easier to explore in the Eastern Desert without fear of being harassed. 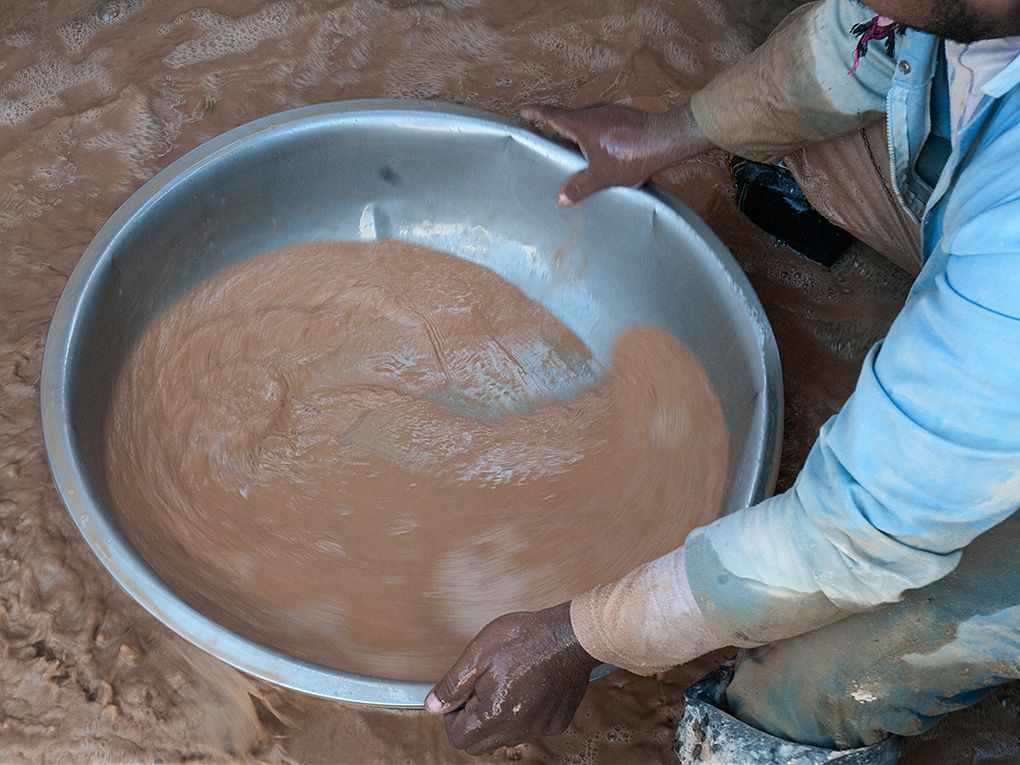 When separating the gold from the rock, the prospectors sometimes use toxic chemicals such as mercury, which helps gather the gold at the bottom of the pan. 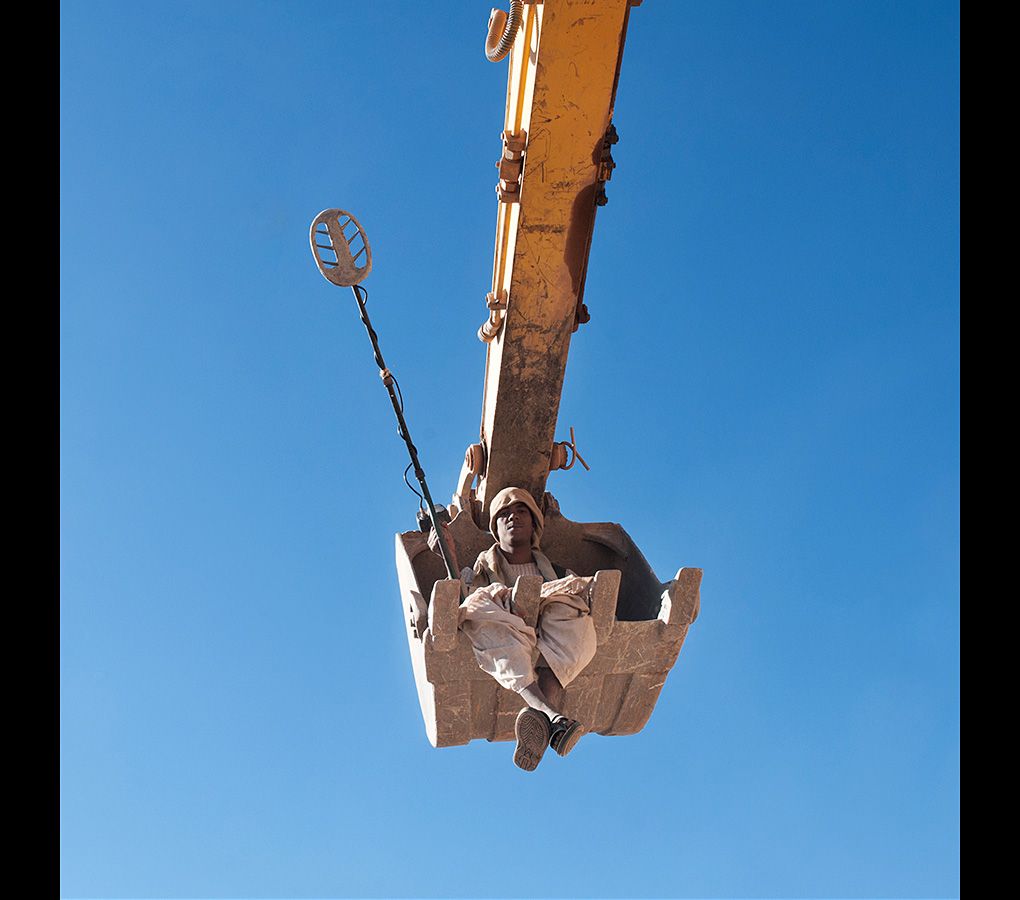 A prospector hitches a ride to swing his metal detector over the side of the mountain. 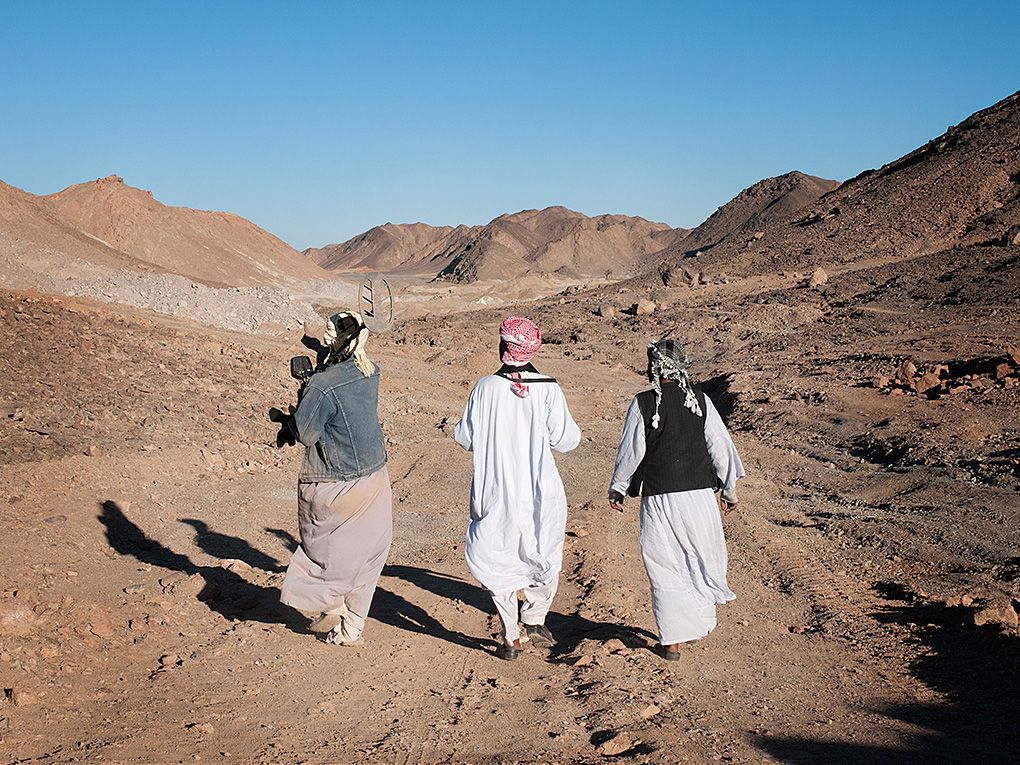