Nile Pollution in Damietta by Hamada El-Resam
By
Hamada Elrasam

In 2008, the Environment Ministry found the 207 most heavily polluted spots on the Nile. Some of the worst pollution is in Damietta, on the North Coast. Residents in surrounding cities and villages have blamed their suffering on factories along the Nile dumping waste into the water, which flows downstream. Damietta residents have protested against a fertilizer factory operated by the Misr Oil Processing Company (MOPCO) and partially owned by the Canadian company, Agrium, since 2008.

After last year’s mass uprising, their protests were reenergized. Last November, clashes between protesters and security forces in Damietta left one dead and 12 injured. Locals named Islam Amin Abdallah, dead at 22 years old, “the environmental martyr.” He has been memorialized in two major squares and a mosque, and by a charity organization.

Demonstrations against the MOPCO-Agrium plant continued for eight months. Employees were blocked from entering the factory until government representatives came to negotiate and promised to end the pollution. MOPCO-Agrium eventually signed an agreement to change some of its policies.

It ended the construction of factory expansions and is repairing its sewage treatment station. A select group of protesters now monitors the factory from inside. And if the agreement is abrogated, the joint venture must pay LE250,000 in medical care for each day it continues to pollute the environment. 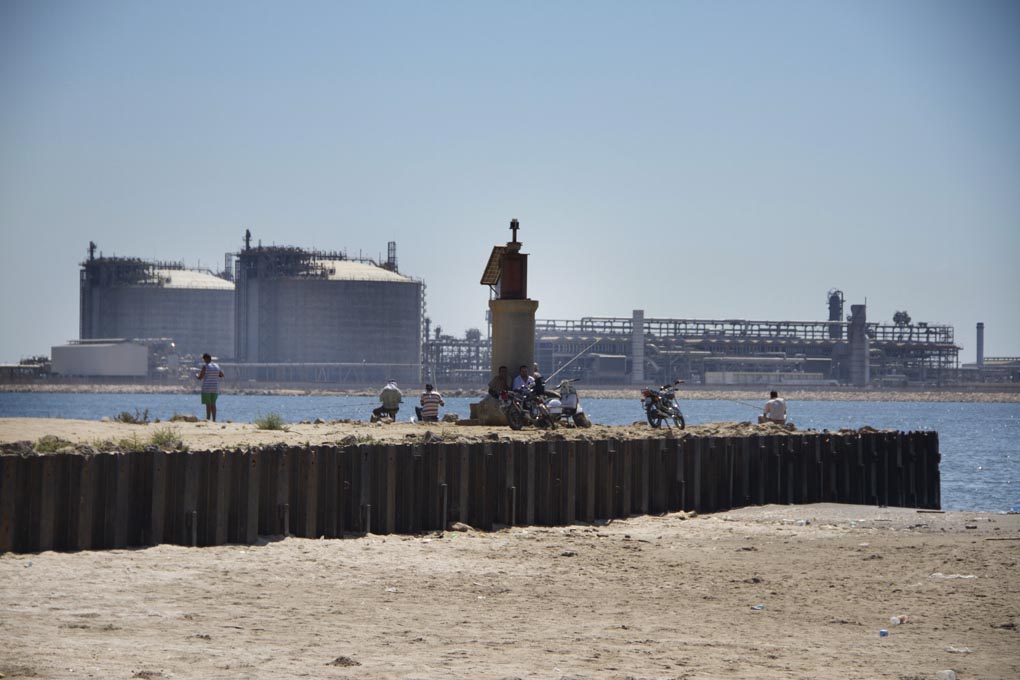 People fish and swim at the bridge near Ras al-Bar beach in Damietta. The amount of aquatic animals in the area has decreased by 50 percent since 2008. 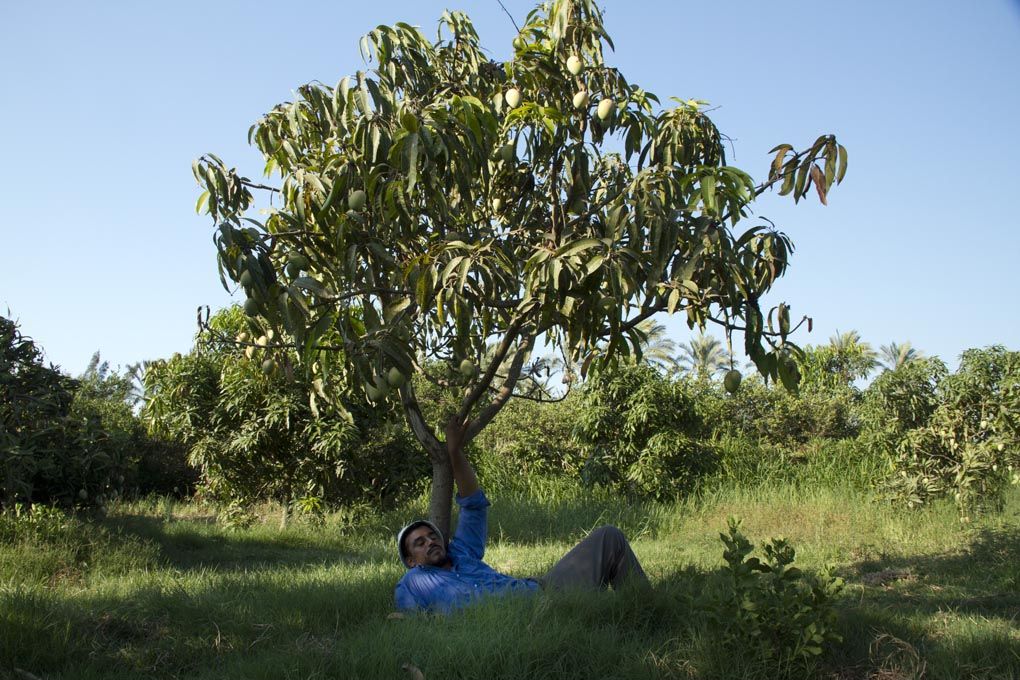 Farmer Mohamed Zakaria rests under a mango tree in his garden near the MOPCO-Agrium factory in Damietta. 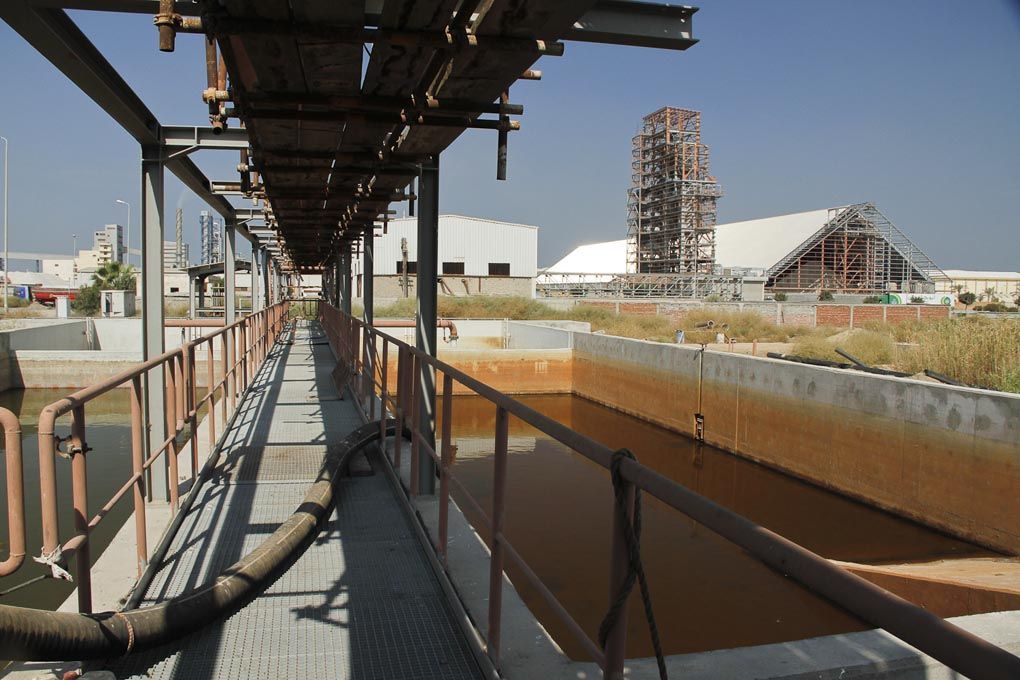 Inside the fertilizer factory. 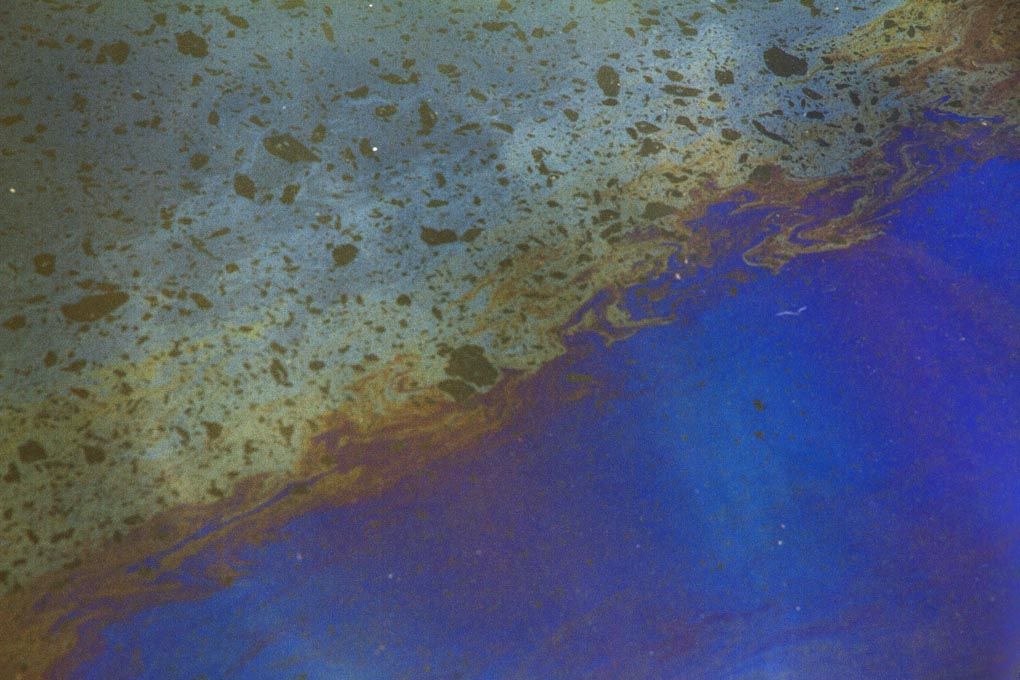 Chemicals float on the surface of the water at the fertilizer factory. 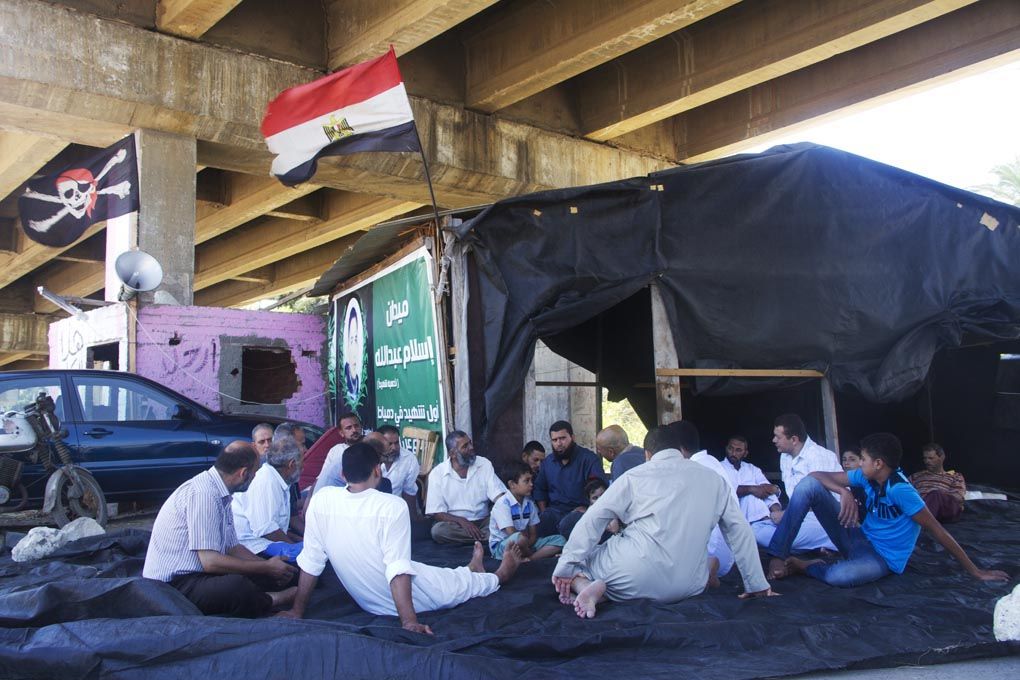 The protest camp under the old Ras al-Bar bridge, which has been painted with anti-factory slogans. 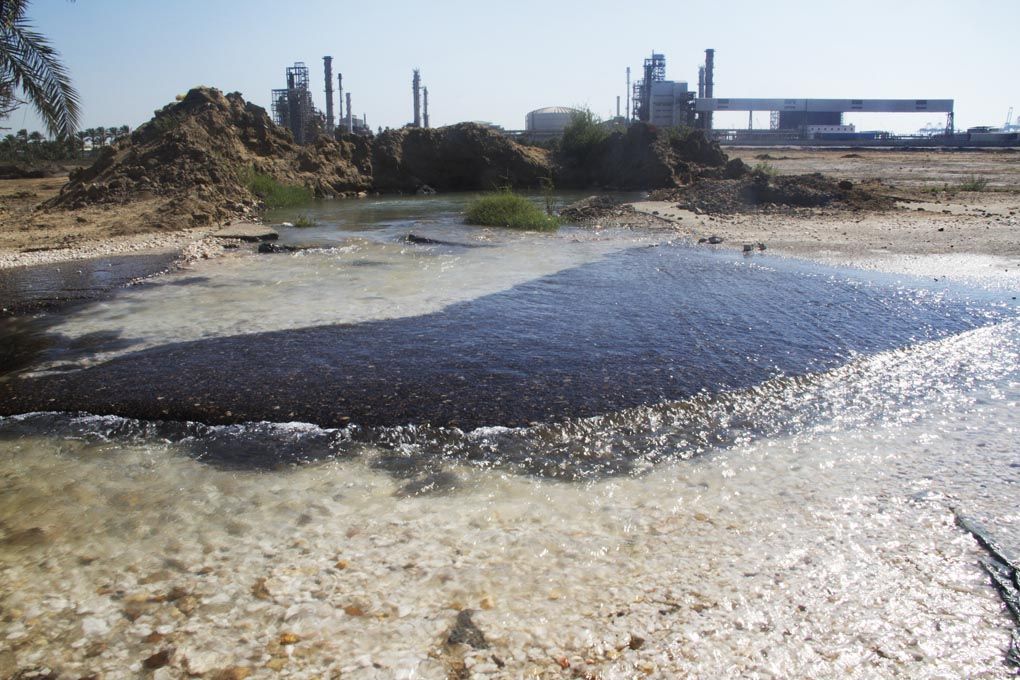 Sewage leaks from a broken pipe. The surrounding environment has been negatively impacted by the liquid and vapor waste spewing from the factory. 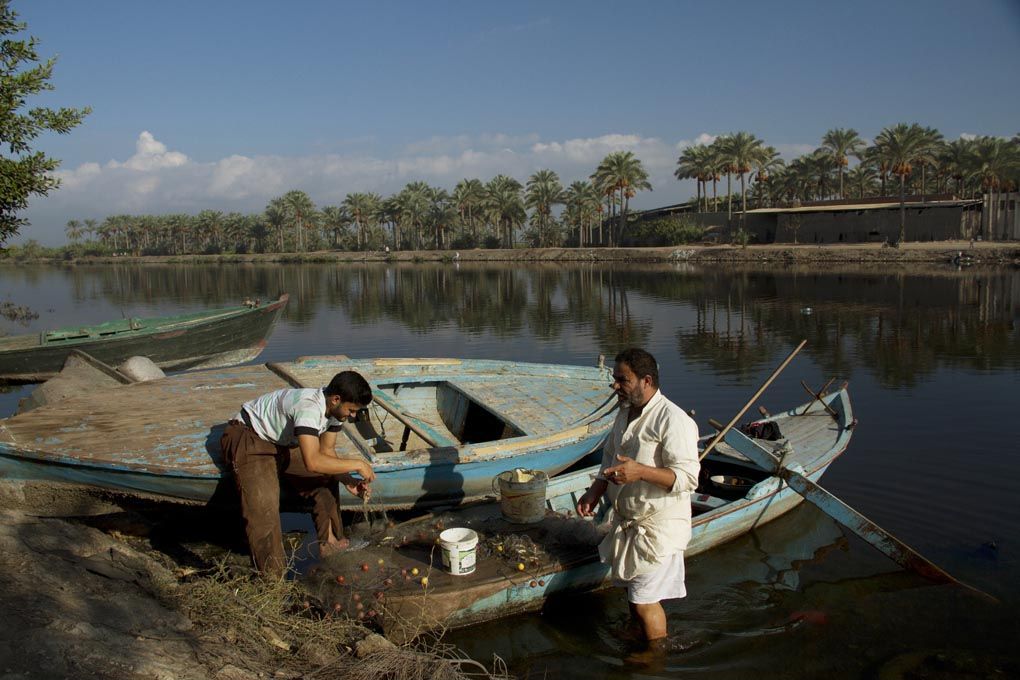 Hamad Abu Obaia (left) and his son Mohamed gather up their supplies after a day of fishing near the plant. Since the factory began dumping chemical waste into the water, they have suffered from skin irritation, and the number of fish has decreased by 50 percent each year since 2008. Earlier in the day, the two reeled in an odd jellyfish-like substance, which they claimed was waste from the factory. 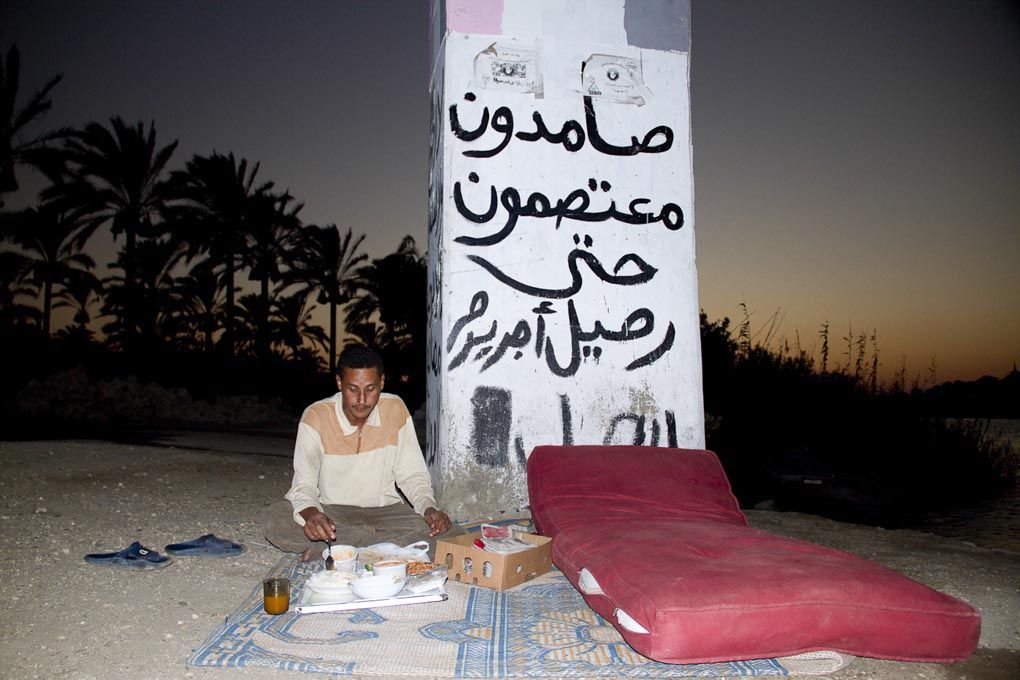 Khaled Mohamed breaks his Ramadan fast with an iftar meal at sunset. The writing in the background says, “Demonstrating until [MOPCO-]Agrium departs.” The protesters took turns guarding their protest site so that someone was always present. 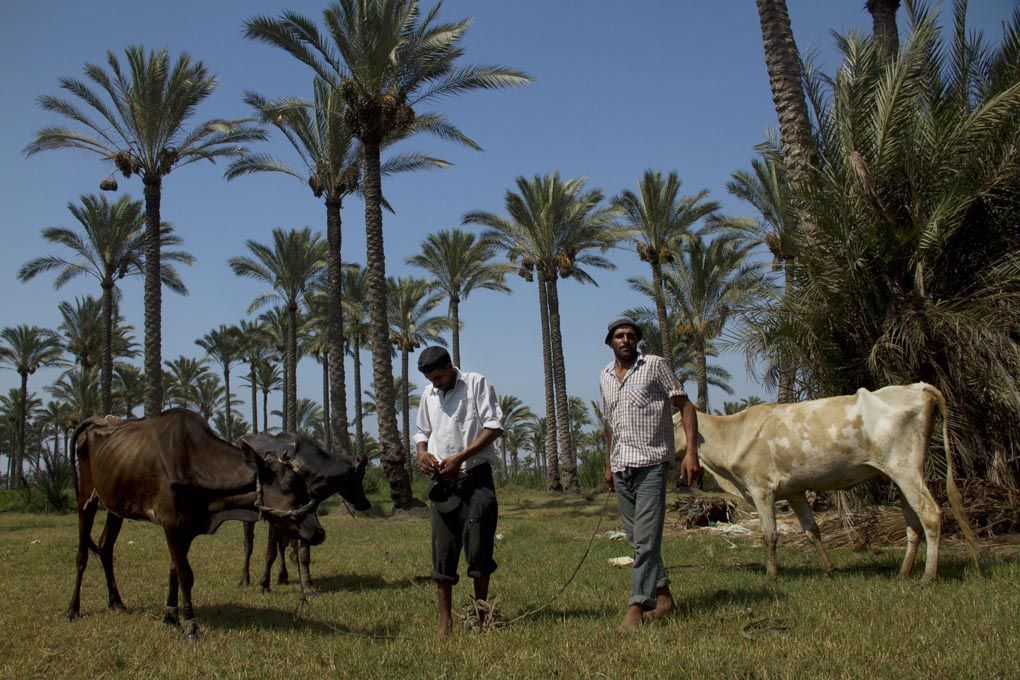 Mohamed (left) and Rafiq Bahlol work on their farm near the MOPCO-Agrium plant. They claim their cows have become sick and unable to gain weight because of the factory’s pollution.

Om Islam holds up a photo of her late son, Islam Amin Abdallah, at her home in Damietta. The 22-year-old was killed by security forces during a protest at the MOPCO-Agrium factory. The local community has named two squares, a mosque and a charity association after Abdallah, who many call the “environmental martyr.” The last of Abdallah’s belongings are stacked in a corner.

Sculptor Mostafa Nawar is one of the activists who protested against what demonstrators called the “death factory” in Damietta. Nawar is building a chair at the sit-in so that he can still be productive away from work.

Salah Serais, 70, is a farmer-turned-activist protesting against the plant. He holds a growth-stunted mango from his farm after it was apparently exposed to ammonium vapors from the factory. Petrochemical factories such as this are the main reason for the polluted Nile water in Damietta. 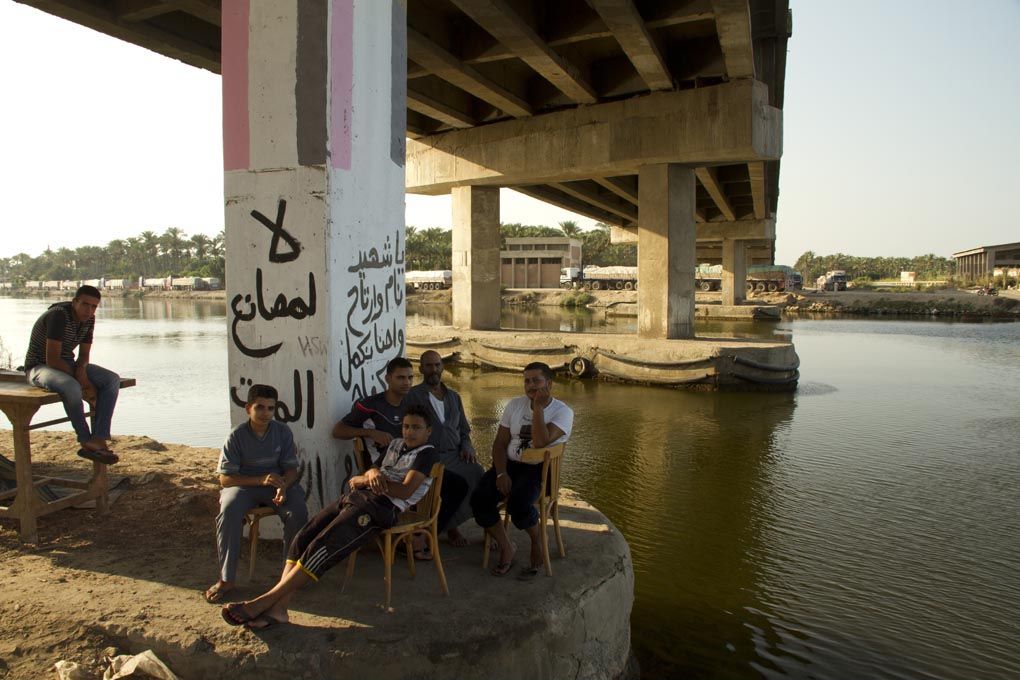 The protesters sit in their camp under the old Ras al-Bar bridge. 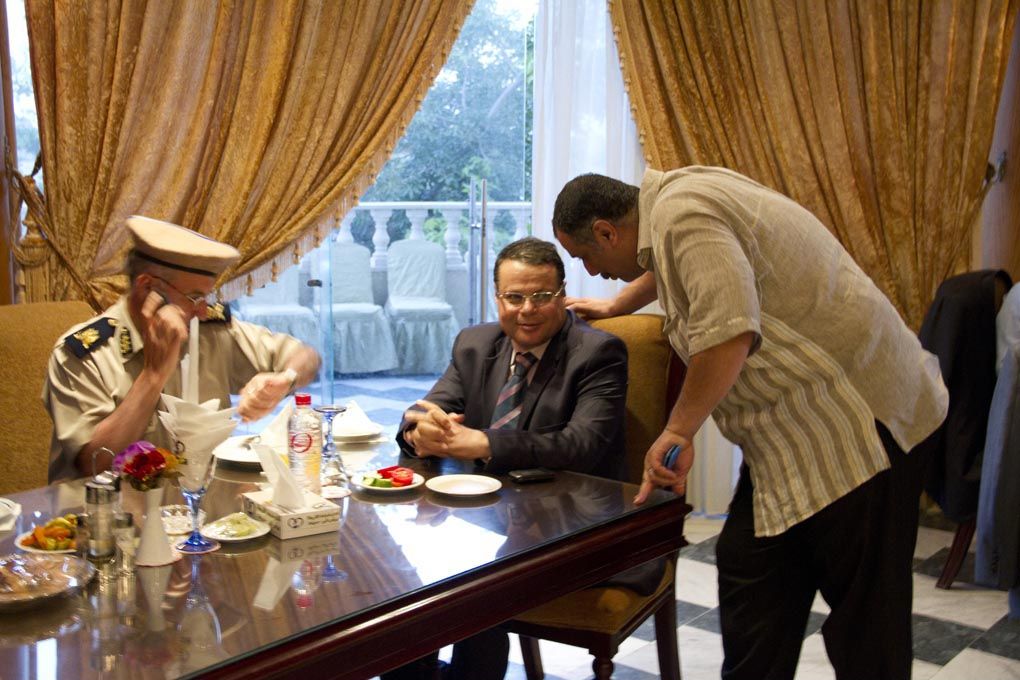 Police officer Ashraf (right) speaks with an assistant interior minister (center) and a military representative during a conference to sign a reconciliation agreement between Damietta’s civil community, represented by mayor Mohamed Ali Feleifal. and the national government, represented by Petroleum Minister Osama Kamal. Ashraf was often assigned to watch the protesters during their demonstration. 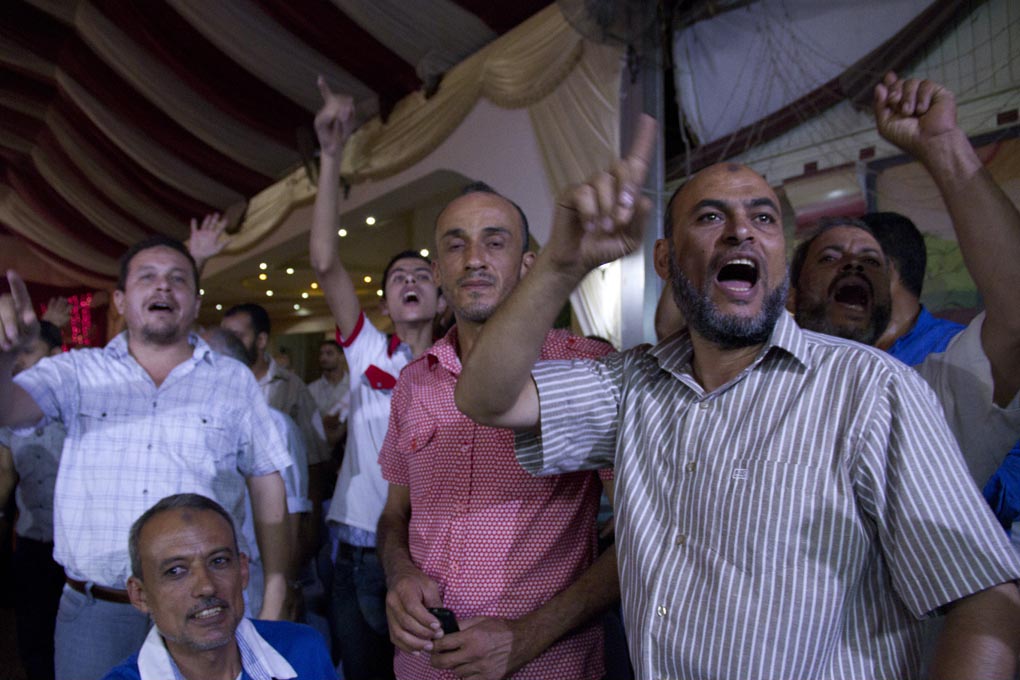 During the conference, protesters broke into chants against the industry and trade minister. The minister had said he would like to see several branches of MOPCO-Agrium plants built around the country. The demonstrators responded harshly, as the minister’s words made it seem as if he didn’t understand their concerns. 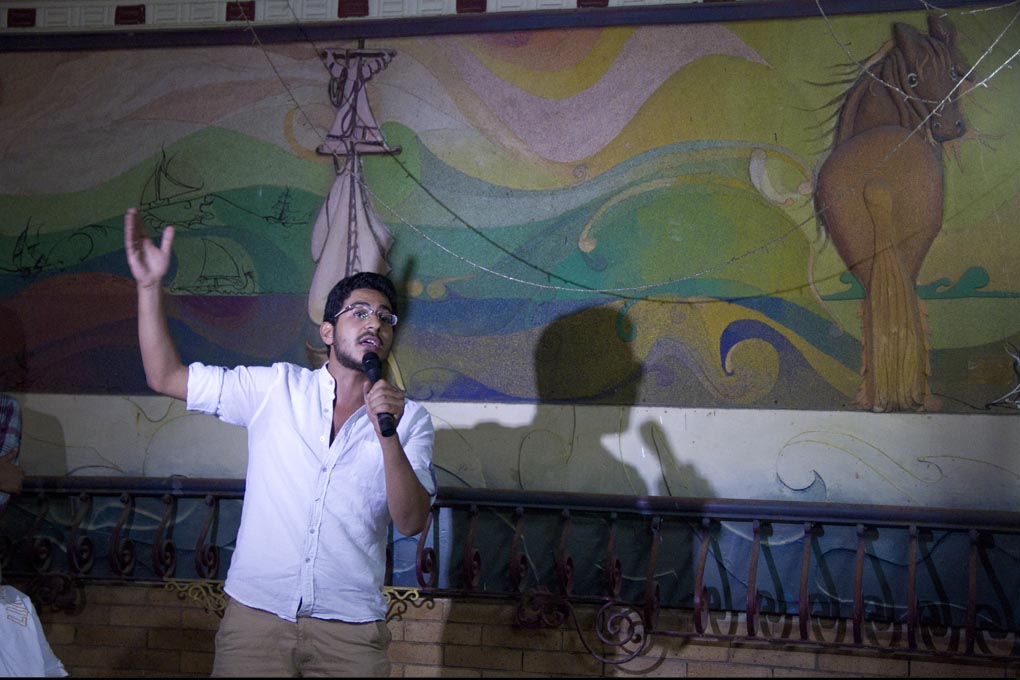 Ahmed Abdel Salam tells the government representatives the protesters’ list of demands at the reconciliation conference. Abdel Salam is one of the few highly educated residents in the village, and often acts as their messenger. 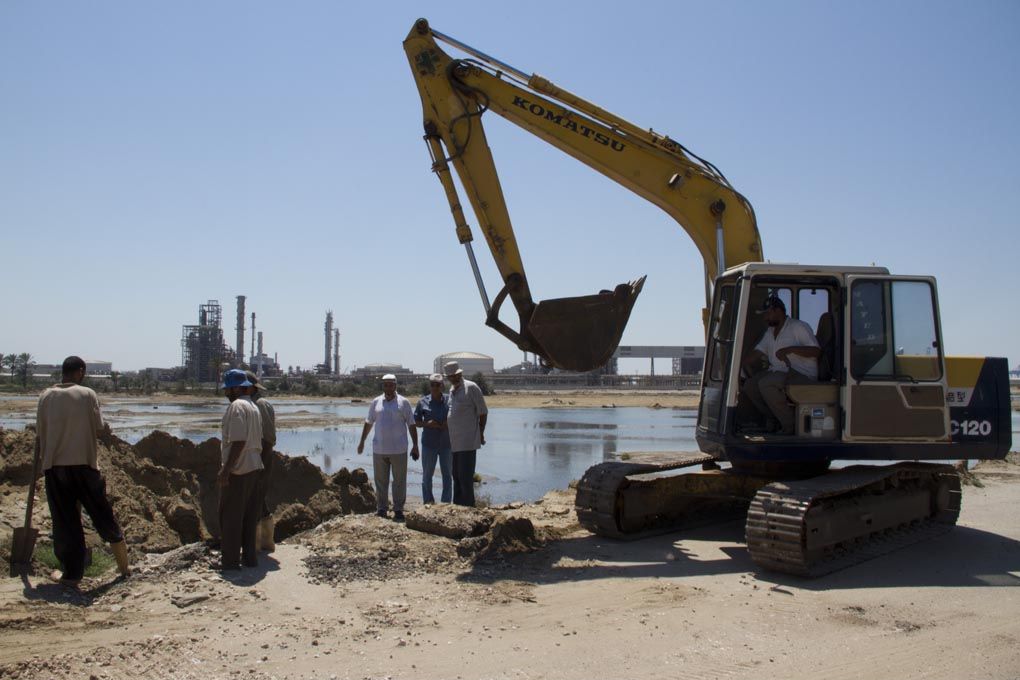 Workers hired by the protesters fix a broken sewage pipe emerging from the plant. 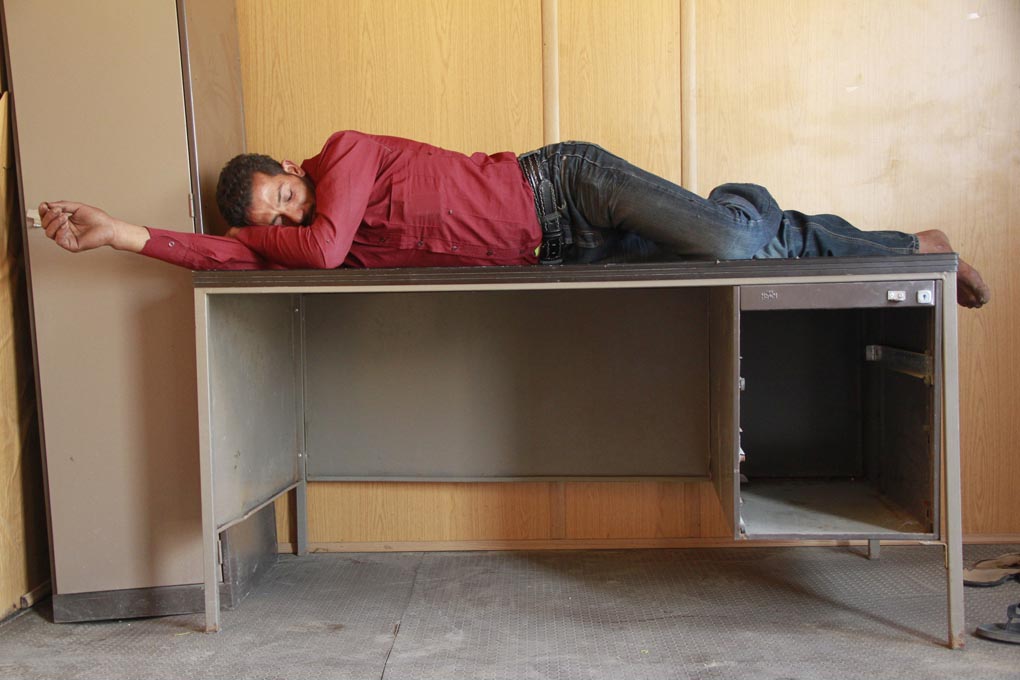 One of the protesters rests on a desk inside a mobile trailer. The protesters won the right to monitor the factory’s environmental performance from inside. 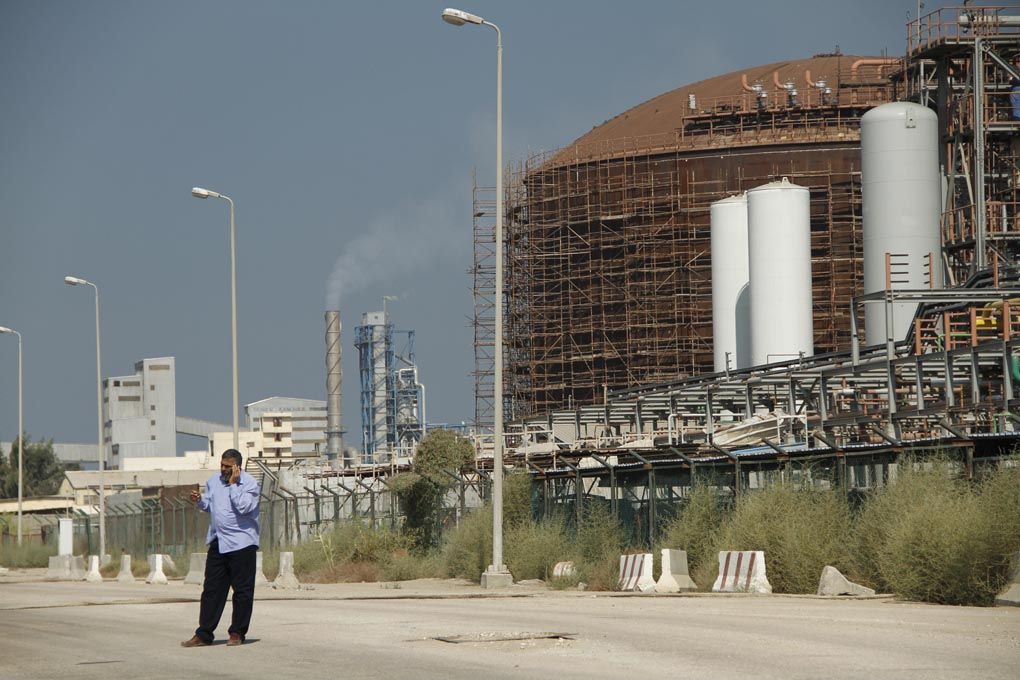 Engineer Omar Abdel Salam, the main organizer of the protest, talks on the phone at the Damietta port area, with a rusted ammonium tank from the MOPCO-Agrium plant in the background. As part of the agreement with the factory, protesters now monitor the factory’s environmental performance 24/7. 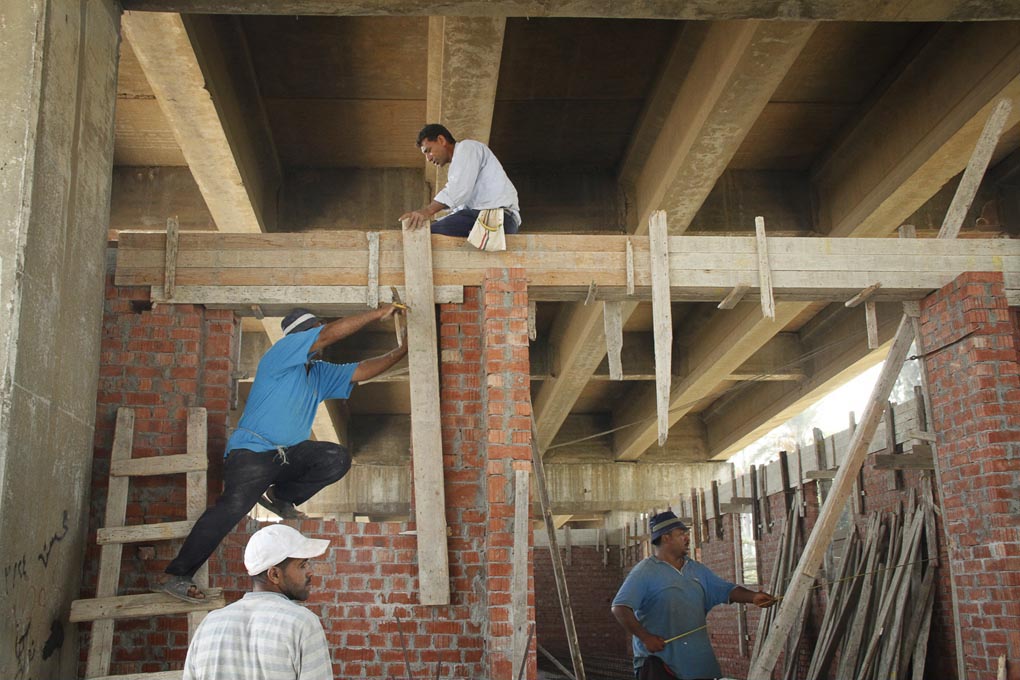 After reaching an agreement with MOPCO-Agrium, the protesters built a mosque that doubles as an office near the factory to monitor its environmental performance.
اقرأها بالعربية
AD
AD
Hamada Elrasam  https://twitter.com/elrasam
Hamada is always ready to take up any challenge in a work place or any other environment. His journey as a photographer started almost a decade ago and was honed at CIC photo-school. “I believe in ‘idea’ and the ‘story’ behind my photograph. I would say I am a photographer driven by art, creativity and inspiration, the ‘idea’ that goes into the making of photograph is what’s important.
4 articles on Mada
Topics
More from Panorama
Coronavirus
The silent nights of curfew
Ravy Shaker
See All Photo Stories