Last week over a million Muslims made their hajj pilgrimage to Mecca in Saudi Arabia. In a last-minute decision, photographer Toufic Beyhum took his camera along on his pilgrimage and documented what he saw:

Everyone flocks to Mecca for one thing and one thing only: to pray. It’s amazing — like a resort for praying. Hotels are fully booked, and the shops and restaurants are packed.

I woke up one morning at 4 am to go and take photos thinking that it would be relatively quiet and I would catch the sunrise. I was shocked when I came out of my hotel to see huge crowds of people heading toward the mosque. It’s just you and God; materialistic things don’t count anymore. You could be praying next to a billionaire or someone who has saved money all their life to afford this journey, and you can’t tell because everyone is wearing the same white cloth.

I wanted to simply show the peacefulness and spirituality of what I experienced. 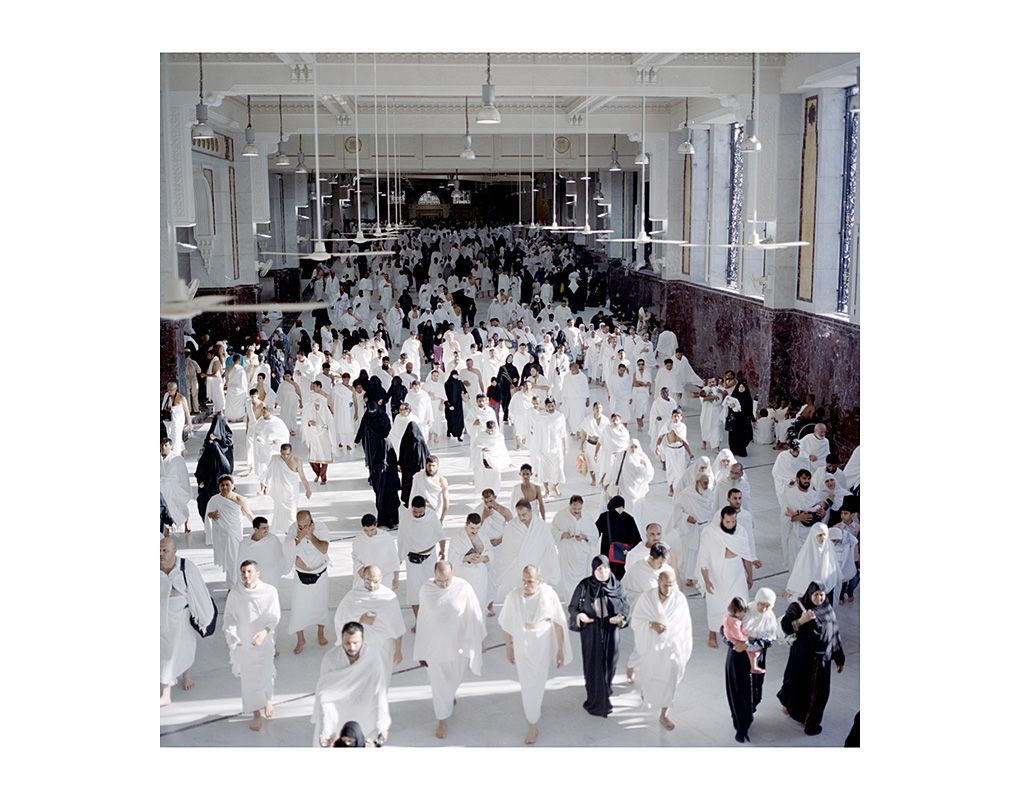 "This is the Sa’ey, pilgrims are walking up and down seven times between the hills of Safa and Marwah which are situated to the south and north of the Kaaba. It has now been paved in marble and made indoors. Prophet Abraham left his wife Hazrat Hajra and infant son Hazrat Ismael in the desert of Mecca at the command of God. The mother and son lived for five days on the food and water that they had but the water ran out. The mother ran frantically seven times between the hills of Safa and Marwah in search of water for her son. Suddenly the fountain of Zamzam oozed miraculously near the feet of Ismael. There are Zamzam taps in the middle so you can have some water as you are walking up and down." 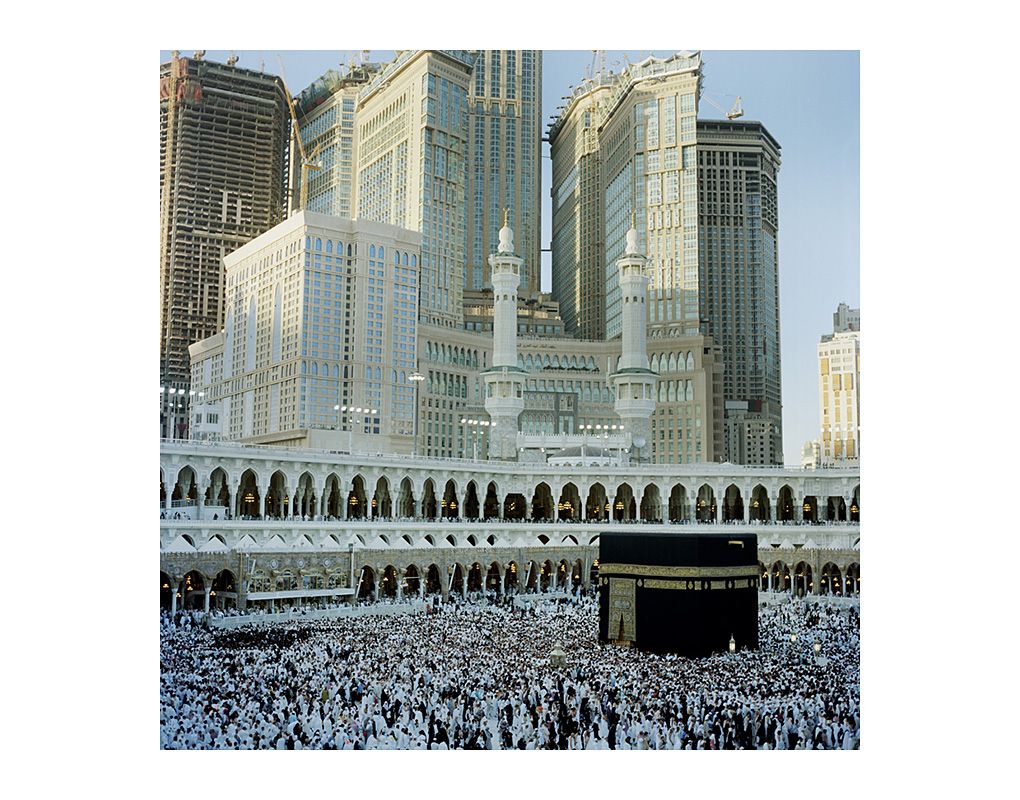 "The kaaba and the movement of people around it are awesome but somehow you can't ignore the massive skyscrapers behind it." 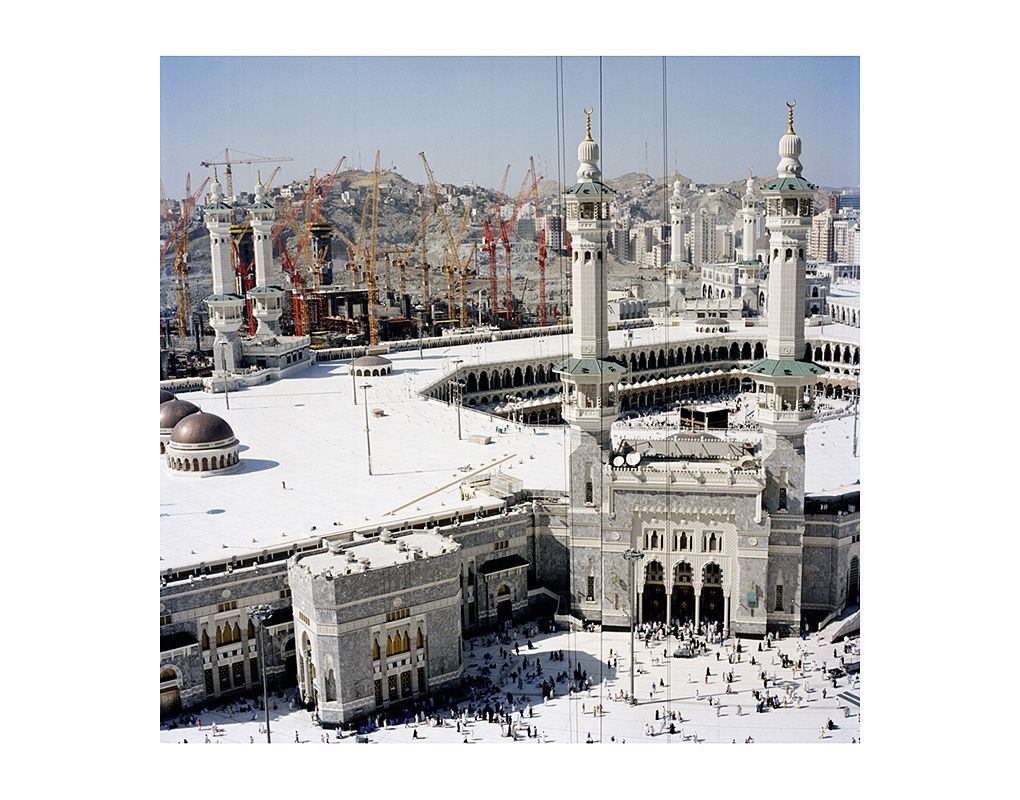 "To show the construction around the mosque I entered the Abraj Al Bait towers opposite the mosque. I rode the elevator as far as I was allowed, without ending up in the royal suites. I took this photo from a floor with a restaurant, a cafe and a massive balcony." 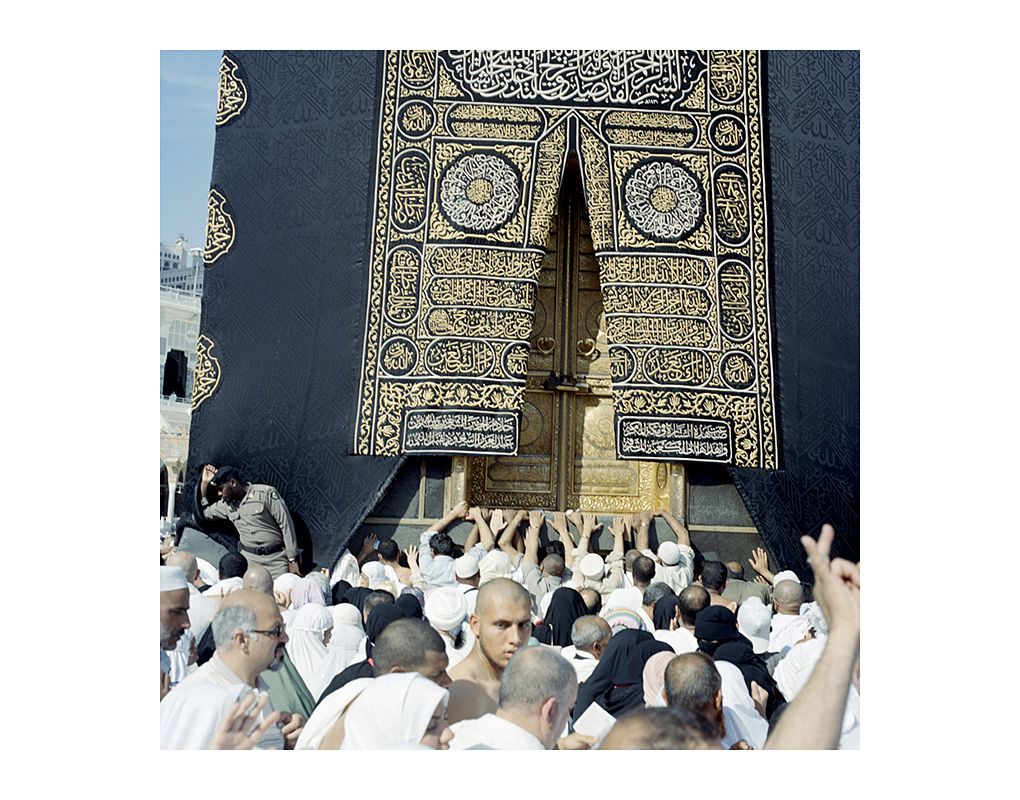 "This shot was the hardest to take, I couldn't just stand still beside the Kaba without being pushed by the flow of people. The people going around the Kaaba are in a religious trance, they walked as if they didn't see you. But it took me time to measure the light with my light meter and hold my heavy Hasselblad steady, frame, focus and shoot. I did this in a few moments and continued moving with the crowd." 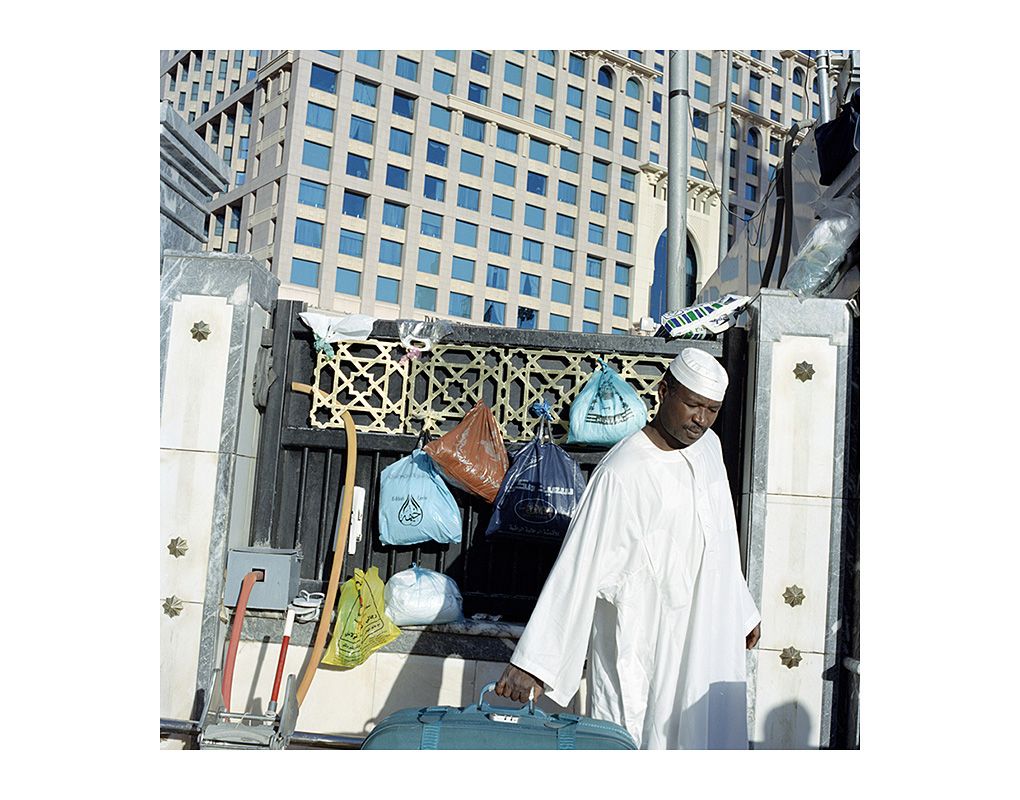 "You are not allowed to bring more than your shoes into the mosque, so pilgrims with bags need often put them in lockers, but the lockers are not free. Since most of the people who go to Mecca have literally saved up all their lives to go they can't even afford accommodation and sleep outside, they bring their own food. They can't afford lockers so people tie their bags, suitcases to the railings just outside the mosque." 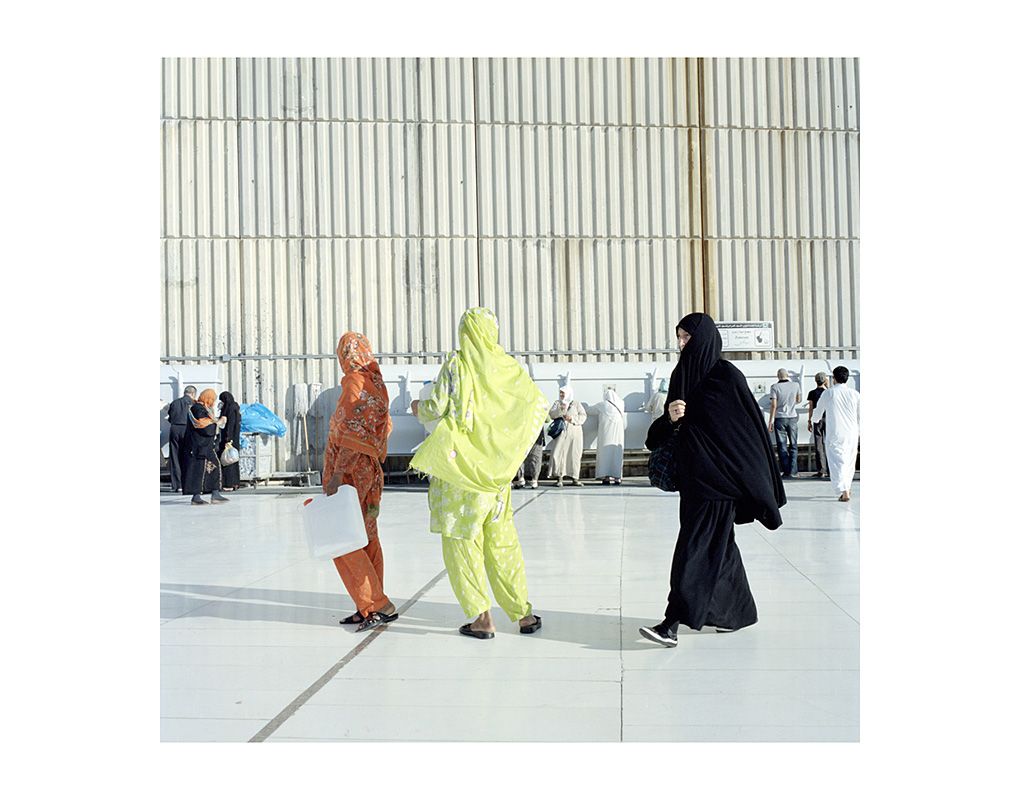 "In the Gulf, women wear a lot of black but Muslims from Africa, India, and Pakistan often wear bright colours." 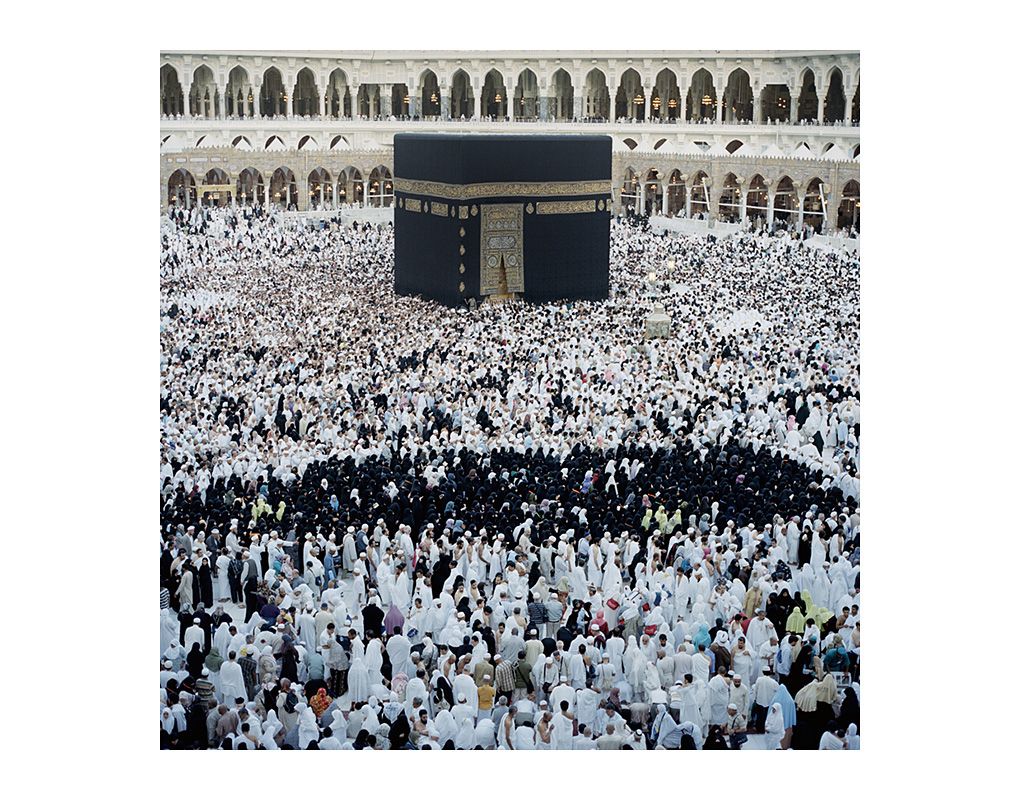 "Some people who go to Mecca go in groups, because it is cheaper and for those who have never traveled before get the peace of mind of being with people who speak the same language. When I saw this group of women dressed in black moving around between all the white it looked so beautiful and graphic." 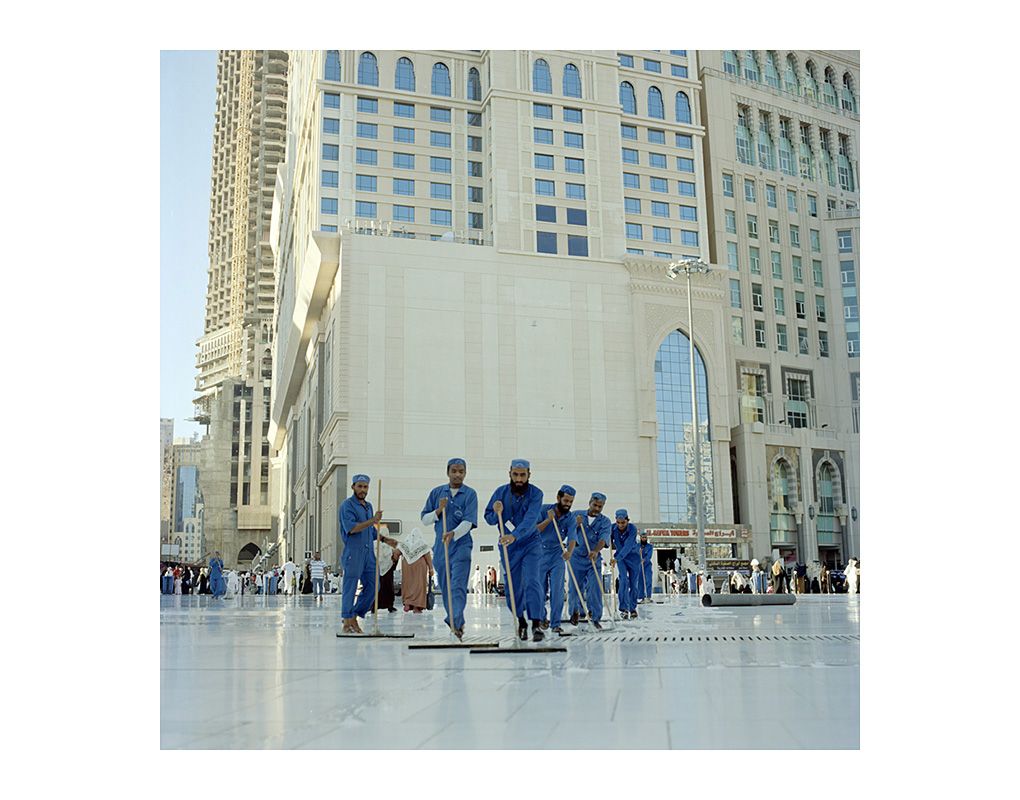 "The mosque and space just outside the mosque are kept spotless. This army of cleaners who are mostly from Pakistan, India & Bangladesh are so fast & efficient. Its like watching a synchronized swimming event. They block off a big area with plastic tape and start cleaning." 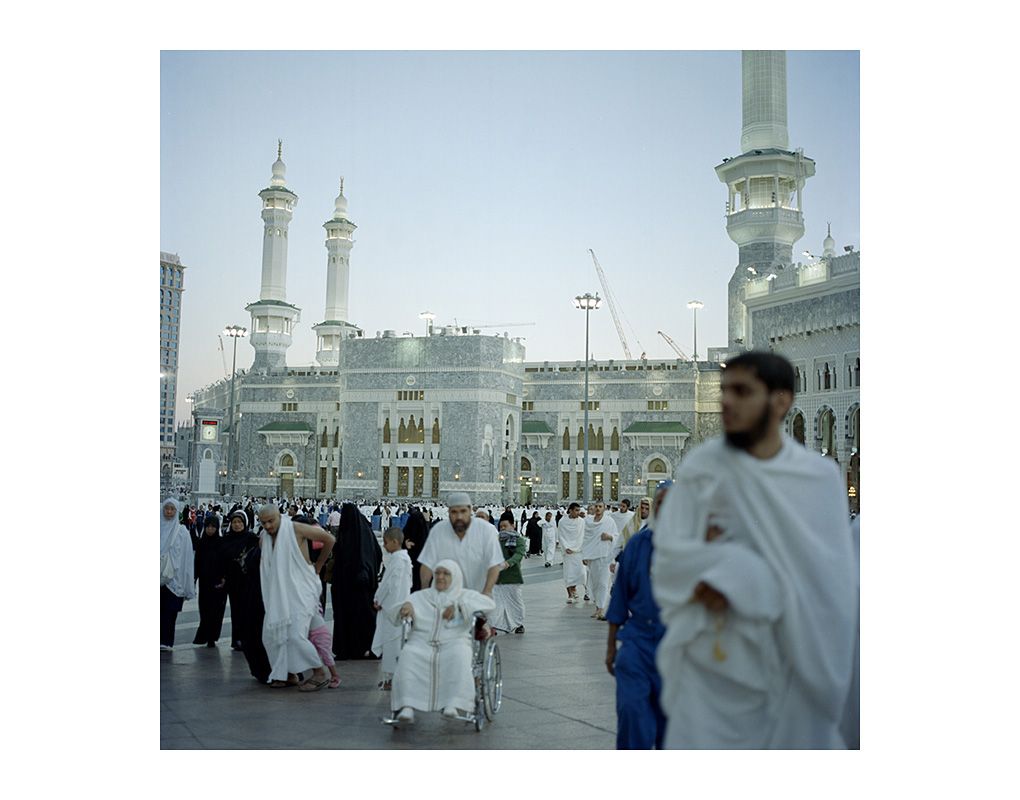 "Worshipers leaving afternoon prayer, its a beautiful time of day, everything becomes very cool and you get this wonderful breeze." 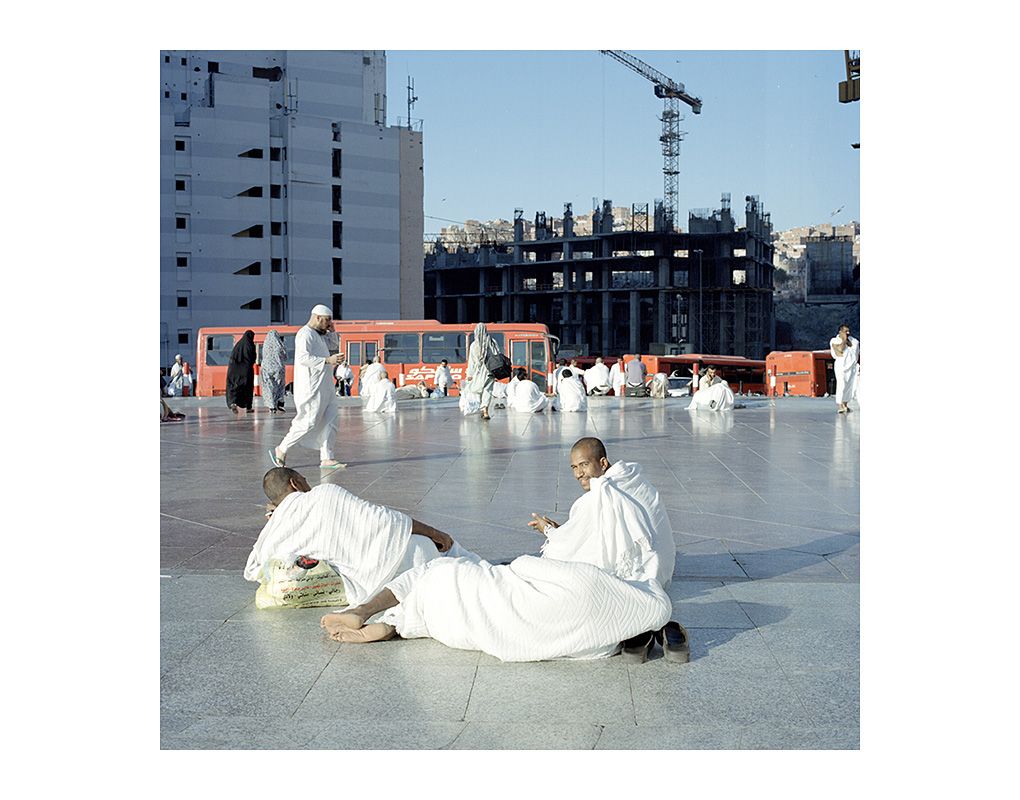 "It can get very hot in Mecca, but the tiles used outside and inside the mosque are the finest quality and remain cool. Its a calm and comfortable place for tired worshipers to relax and chat." 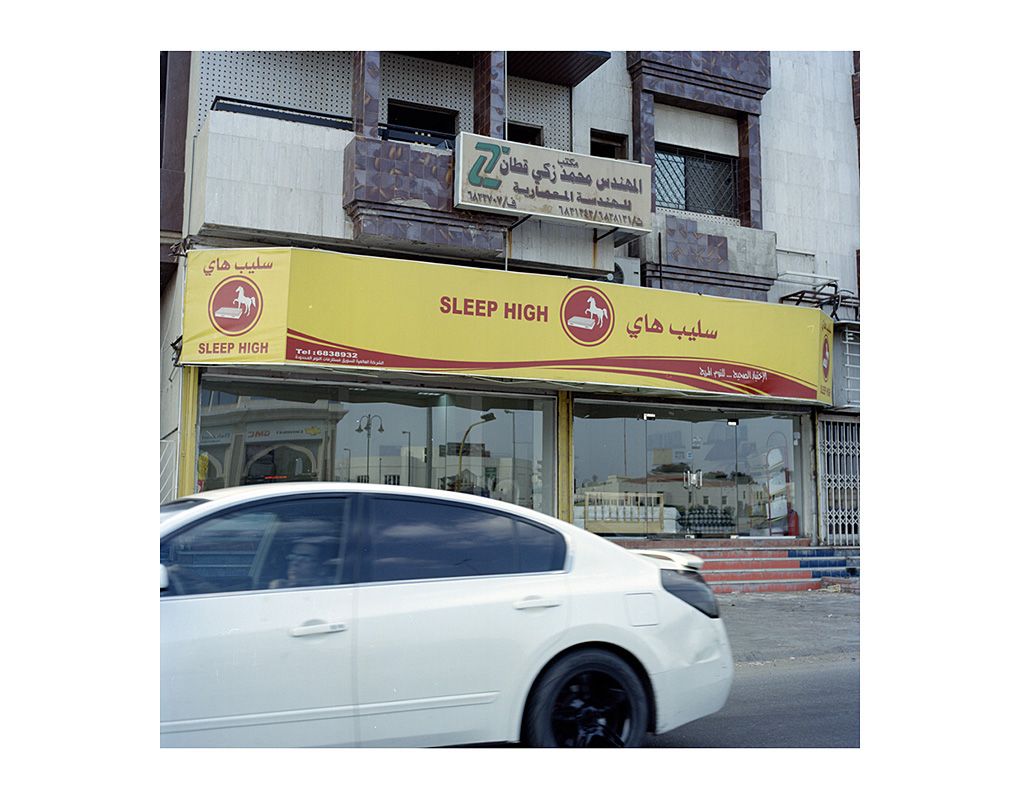 "I liked the name of this bedding chain and it seemed so relevant because everyone in Mecca are high on religion." 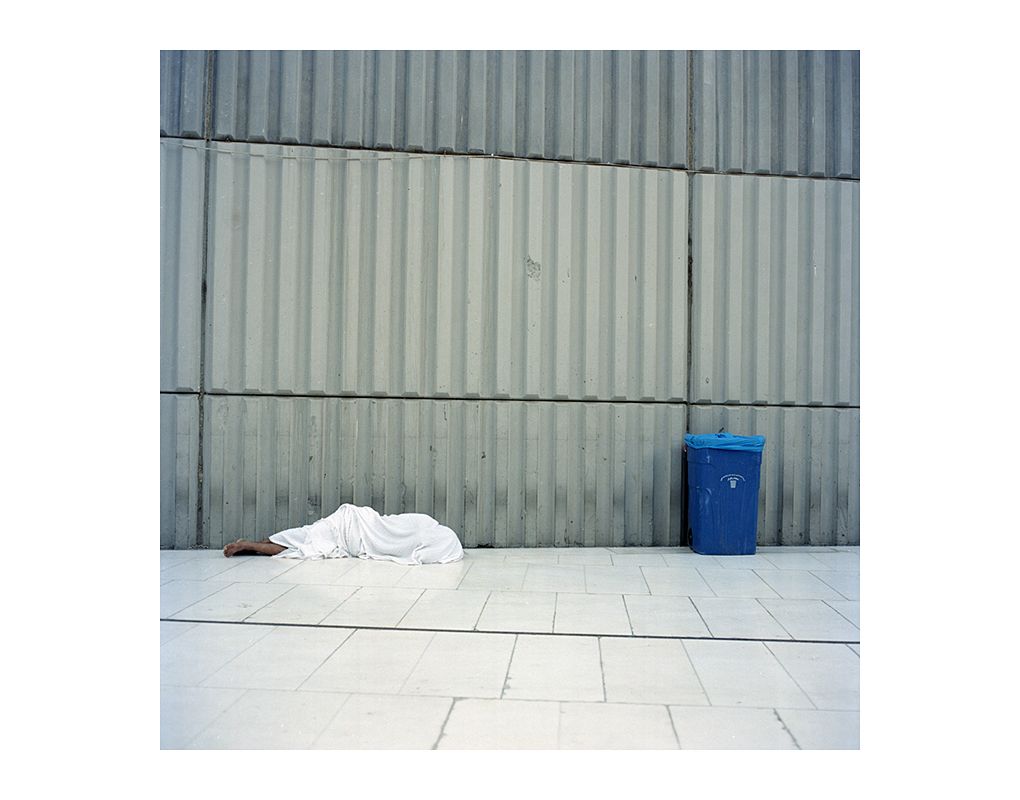 An exhausted worshiper takes a nap in the shade. 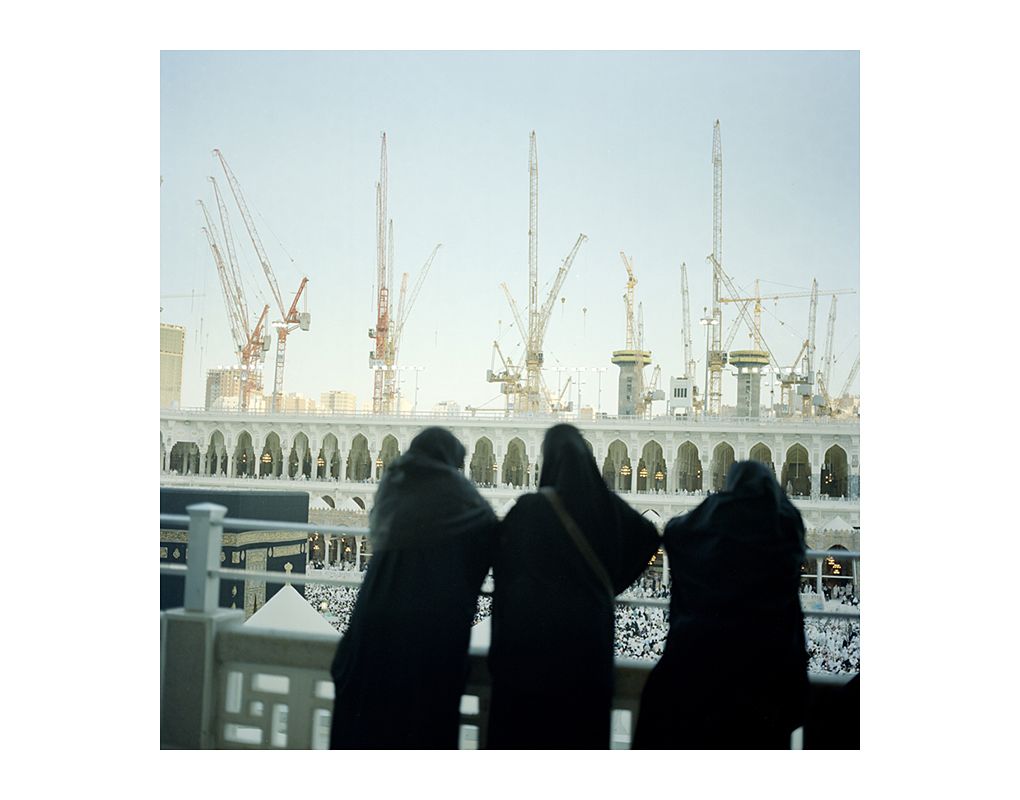 "The view behind the mosque is quickly changing as new buildings are starting to tower over it." 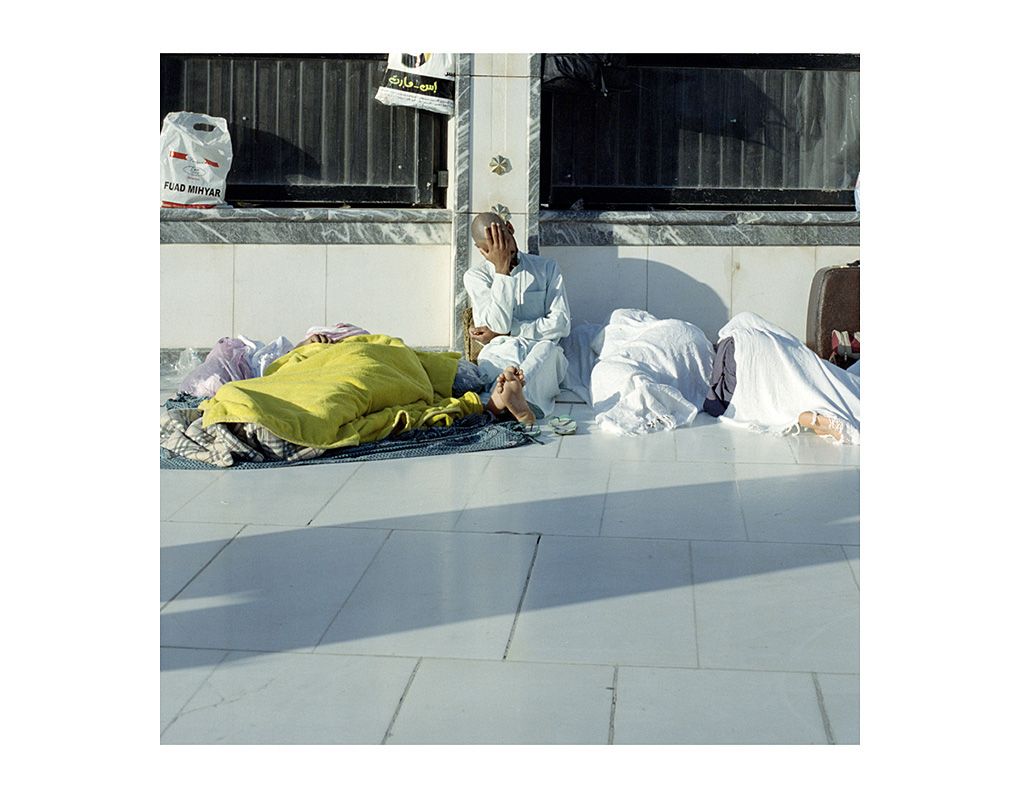 "Praying and going around the Kaaba seven times in the heat can be very tiring." 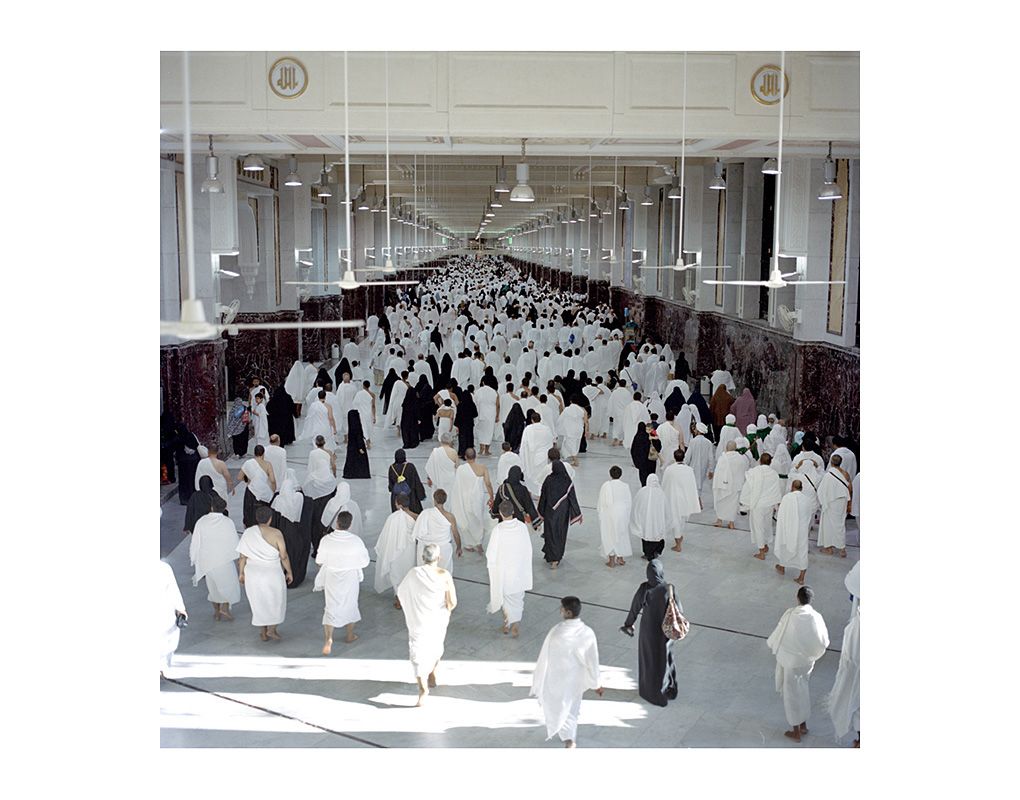 Pilgrams walking in the opposite direction. 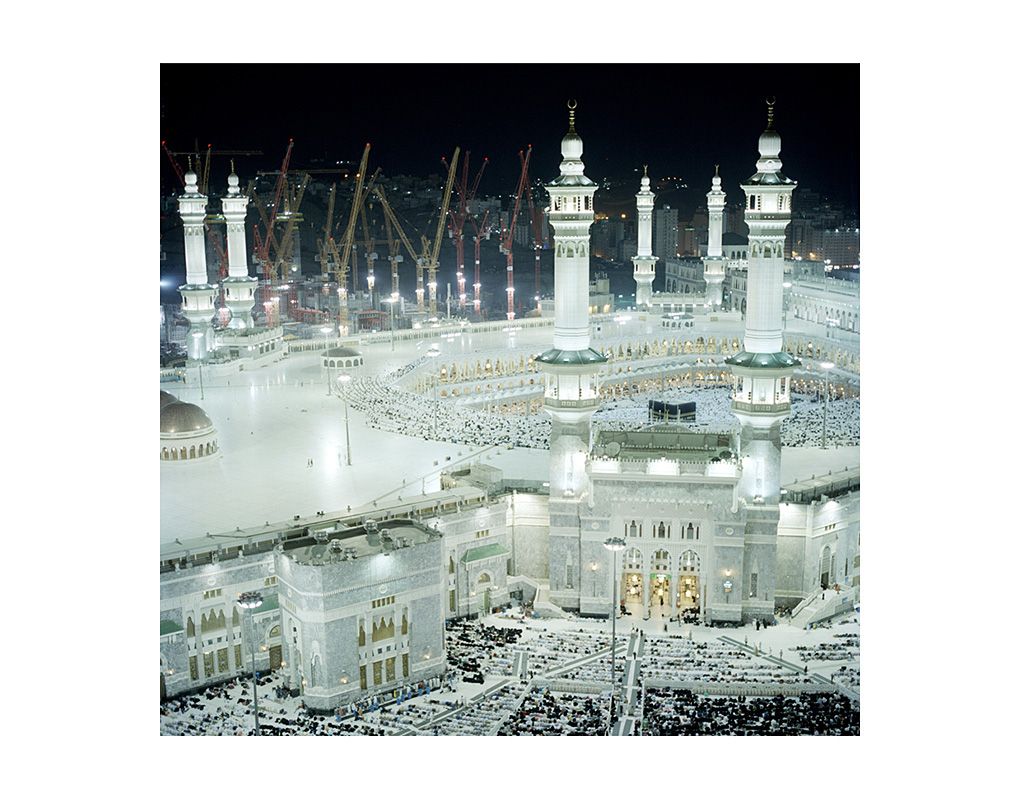